watchOS 2.2.2 The Latest Firmware For Your Apple Watch 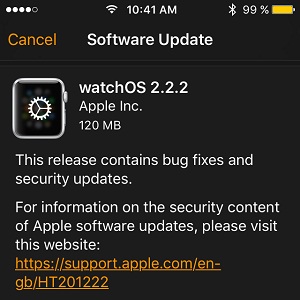 Time to update the software on your Apple Watch! Together with iOS 9.3.3 and the third iOS 10 Beta version, Apple has also seeded watchOS 2.2.2. Looking at the version number you can anticipate that this isn’t a major update. This is also confirmed by the fact that a single beta was released before the official roll out. However, it brings bug fixes and security improvements to your Apple Watch.

At first sight you might neglect it, but digital security is crucial nowadays. We encourage you to update for this latest version and allow Apple to patch the flaws of your smartwatch. Updating is done, as always, from the Apple Watch app available on the paired iPhone. Enter it and browse to General -> Software Update. After the new firmware is detected by your device, hit Download and Install. Agree with Apple’s Terms and Conditions!

Update Apple Watch to watchOS 2.2.2
To confirm the update tap your Passcode when prompted on the smartwatch. Once, confirmed the iPhone starts downloading the update. 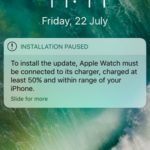 Fact: Before starting make sure that all of the following three conditions are met:
1. The Apple Watch is connected to a charger.
2. Charged to at list half of its battery strength.
3. In range with your iPhone and both devices are connected to WiFi.
If all of the above is checked the iPhone will first Download the update package and then deploy it on the Apple Watch.

The Apple Watch will automatically restart itself after the update ends. Enter Passcode and you’re ready to go!