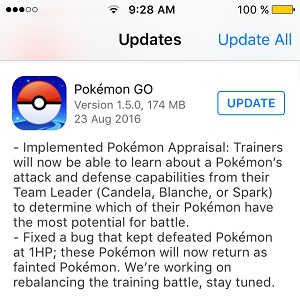 Niantic has just seeded a new update for the iOS version of Pokemon GO, exactly two weeks after the 1.3.1 release that didn’t innovate anything either, excepting a few stability improvements. Pokemon GO 1.5.0 is available for Update/Download in the App Store and comes with two changes: Pokemon Appraisal and a bug fix! It’s yet another update that doesn’t bring any significant improvement to this blockbuster Augmented Reality game that is slowly losing it’s fans.

Version 1.5.0 is 174 MB large and is compatible with iPhone, iPad and iPod Touch running iOS 8 or later. PokeTrainers are still waiting for the option to collide their best creatures in real time battles with fellow gamers, or at least be able to trade Pokemon with other players. With these important interaction features missing, the game sees a gradual decline in the amount of active users, reports indicating that Niantic’s app has lost about 30% of its peak market share achieved in mid July.

How To Download Pokemon GO 1.5.0
If you never tried to hunt and catch fantasy creatures before download Pokemon GO from the App Store, as you do with any other iOS app. If you’re already a trainer, tap the same link, highlighted above and choose Update to grab the latest version of Pikachu and his friends.

Pokemon GO 1.5.0 Update Log
Niantic indicates two changes from the previous version:
– Pokemon Appraisal Feature: allows Trainers to inquire for additional information about their Pokemon battle skills. The virtual Team Leaders (Candela, Blanche or Spark) depending what team you’ve joined provide you the strong and weak points of each monster, allowing you to improve your selection for the next battles
– Battle Bug Fix: some defeated Pokemon were previously listed with 1 HP after losing a battle. This bug has now been corrected and all creatures are listed as fainted after a defeat.

Fact: Niantic launches one more promise, committing to achieve a rebalancing of the training battle. The make this engagement at the end of the update log, asking us to stay tuned! We’ll surly do so and let you know whenever something new becomes available!