Raise to Speak: A Must Use Siri Gesture Shortcut! 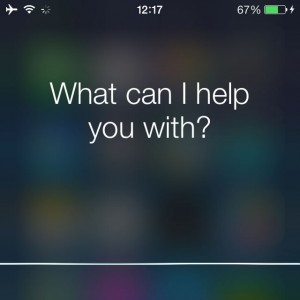 Siri answers to Raise to Speak.

I assume that you are pressing and holding your Home Button to call Siri on your iPhone. That’s the procedure used by most iOS users to call their built-in voice assistant. However, here is a shortcut that will allow you to use Siri with a simple and very efficient gesture!

Yes, I’m talking about the Raise to Speak option which allows you to call Siri by raising the phone to your ear. Once you do it, you’ll hear the traditional Siri beep and you can proceed with instructions or inquiries for your voice assistant.

How To Enable Raise to Speak
You only need to tap Settings, navigate to General, next up is Siri. Here you have to check first that your voice assistant is ON and also turn ON the Raise to Speak option, by tapping the nearby switch.

Calling Siri via Gesture Shortcut
Using Raise to Speak is very easy. Simply perform the same motion with your Apple device, like the one that you do when you answer to your iPhone, bringing it to your ear. You’ll hear a beep. Next you can proceed with instructions or questions for Siri!
Benefits
– it’s a shortcut, meaning it’s faster.
– gesture looks and feels more natural.
– calling Siri via this gesture will prevent iPhone Home Button usage!
– works even if screen is locked!

Disadvantages
– iPhone screen has to be on!…compared to calling via Home Button, which does not require for screen to be on.
– Doesn’t work while phone is in AirPlay mode. Not sure if this is an iOS 7 bug or if there is a valid explanation for this!

Raise To Speak iOS 8 Update
Starting with iOS 8 Apple has removed the ‘Raise To Speak’ option and has replaced it with the Hey Siri feature, which allows to call Siri, vocally, without touching your iPhone. However, it comes with a lot of constrains which make this replacement highly controversial.
Also, the gesture shortcut used for Raise to Speak, is now assigned to activate the Raise To Listen option for listening and sending of audio iMessages.

Raise to Speak Demo
Watch this video and you can see how to enable and use this handy gesture shortcut for calling Siri while using an iPhone 5s, running iOS 7.