iOS 11 select and move multiple apps at once.

Organizing apps on your iPhone and iPad Home screen is about to become a lot more efficient in iOS 11. The upcoming operating system finally allows users to select and move multiple app icons at once. That’s great for app grouping and folder repartitions. Gone are the days when you had to drag and drop each icon at a time. With the multitude of apps installed nowadays on a smartphone and tablet efficient organization is mandatory.

iOS 11 is due this fall along with the iPhone 8 anniversary edition and the planned S-iterations. However, Apple has already issued a Developers beta version and we did not waste any time to play with it. Accidentally, I discovered that you can grab multiple apps when moving them around. So, I decided to use the new Screen Recording tool and show you how easy it is to rearrange apps on the iOS 11 Home Screen.

How To Select And Drag Multiple Apps At Once 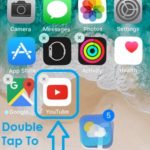 1. Press & hold on one of the apps that you want to move until all icons start shivering.
2. Continue to hold the initial icon while using another finger to double-tap other apps that you want to simultaneously reorganize.
3. Notice how the icons add-up and a blue badge informs you how many apps you’ve currently selected.
4. Drag the newly created bundle towards a new Home Screen page or within a folder.
5. Release your initial hold and apps will be deployed in the new location.