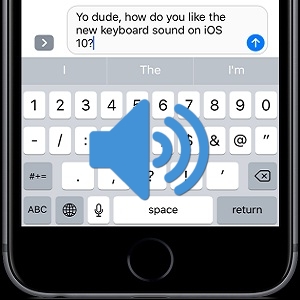 Among the new Lock Screen interface, Messages add-ons, Raise to Wake and other important features, iOS 10 also comes with an interesting novelty from the audio point of view. Apple has decided to changed the Keyboard clicks and the way the iPhone sounds when the screen is locked. This means that your iPhone will sound different when typing a message, note or any other type of text input. Pressing the Sleep button and locking the device is also confirmed by a different alert.

In the past few days we’ve received a series of emails from readers that haven’t updated for the iOS 10 Beta, but are very curious to hear the new sounds. We listened to your demand and recorded the sounds made by an iPhone 6s while typing a message and locking the screen. Of course that any iPhone model running iOS 10 or later will sound the same no mater if it’s a 7, 6 or 5. iPhone 4s or earlier generations aren’t compatible with iOS 10.

Update: Locking Sound changed in iOS 10 Beta 5. Check it below: 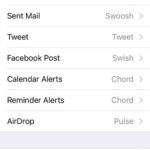 Enable / Disable Keyboard Clicks & Lock Screen Sound
If you’re not a fan of these sounds you can disable them in two ways:
1. First it’s the brutal option. You can silence your iPhone completely by tweaking the Silent Switch ON. It’s physically available on the left edge of your device.
2. The more gentle way is from the Settings app. Browse for Sounds and scroll all the way down to Lock Sounds and Keyboard Clicks. Toggle the knobs to disable.

Updated: iOS 10 Back, Space, Return and Letter Keyboard Sounds
iOS 10 Developer Beta 4 was just seeded with more changes to the keyboard sounds. Distinct audio has been added for the Space, Back, Return and Switcher between Letters and Numbers. Listen to the new sounds in the recording available below. The recording starts with the Back key and then mixes letters with Space, Return and Back: