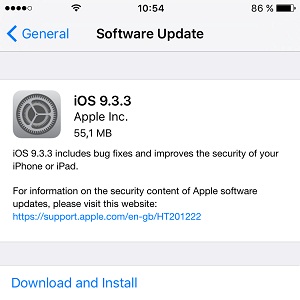 Apple has just released the 9.3.3 version of iOS. The firmware comes with no important new feature. Those are saved for iOS 10 instead, which is in its beta testing phase. iOS 9.3.3, as with most smaller updates, covers bug fixes and brings a series of security improvements to your iPhone, iPad or iPod Touch. The update size is very small, around 50 MB. This means that you can complete the whole process within minutes with the OTA (over-the-air) option.

Should you upgrade to iOS 9.3.3? If you’re not a jailbreak seeker you should definitely grab this latest roll out. Especially, because of the security improvements. It took 5 betas for this update to shape out, so it has to be stable and smooth. Why jailbreakers shouldn’t rush for it? Simply because the more up to date your iPhone software is, the more less likely is that the upcoming jailbreak will support your version. It takes month to develop a jailbreak and Apple has made things more and more difficult nowadays. So, if a jailbreak team is working on iOS 9.2 and you already have upgraded iOS 9.3, you might not be able to downgrade until Apple unsigns the built. 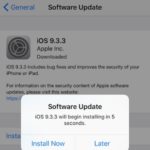 The easiest and most convenient way is over-the-air directly from your iPhone. The release is still fresh, so you might not get a badge alert, on your home screen, over the Settings icon. Tap it and browse for General -> Software Update. Allow your iPhone to interrogate Apple’s servers. After the new release is found, tap on Download and Install. Agree with Apple’s terms and the update process starts. The firmware is first saved on your device. When ready light up the display and hit Install Now to start the process, or wait until the 10-second countdown elapses. The device will verify the update and start implementing it. It will automatically restart when the process is completed. Type your Passcode and you’re ready to go!

iOS 9.3.3 Security Upgrades
Some of the glitches patched by this update are:
– Calendar app would force restart if a malicious invite would have been received.
– FaceTime vulnerability that could have permitted an attacker to continue to listen to the audio of an iOS device even after a FaceTime call was ended.
– Safari would have allowed user interface spoofing when a malicious website was loaded.
– Siri Contacts would have allowed a third party person with physical access to the device, to see private contact info.
Fact: If you want to read the complete iOS 9.3.3 Security Update log please tap here.