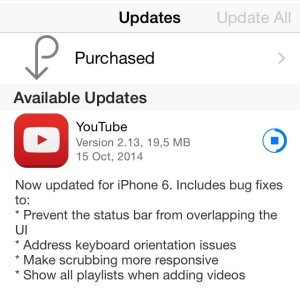 Google has just released version 2.13 of their Youtube app for iOS. It’s a much awaited update for all iPhone fans, the first one that has dedicated support for the latest Apple flagships, the iPhone 6 and 6 Plus. Do mind that the application requires iOS 6.0 or later to run on your Apple device. It’s size is 20.4 MB and the official release date is today, October 15, 2014.

This version contains an important bug fix that was occurring on iPhone 5, 5S, 5C and older models which caused the status bar to overlap the User Interface. Another important bug fix solves a keyboard orientation problem. More, if you where unsatisfied by the responsiveness of seeking through an Youtube video backwards or forwards, you should find scrubbing much more handy after this update.

Last but not least the issue with the missing playlists has been also fixed. You can now add videos and see all of them. We’ve already spent 30 minutes with the latest Youtube for iOS version, on the iPhone, and everything looks fine. There are also no reports that should contradict this. If you plan to update Youtube on an iPad though you might wanna wait a few more days as there are some content display complaints.

You can update Youtube for iPhone by clicking this official App Store link. You can also check other Google apps that have fresh updates for iOS 8 and iPhone 6 like Gmail or Google News & Weather.