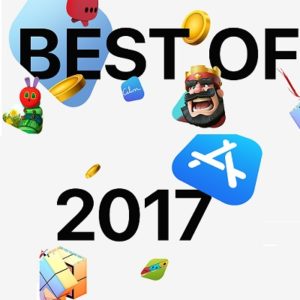 Apple has announced today the Best of 2017 App Store awards and you can find below all 10 apps and games that have won this prestigious title in their respective categories. There are 5 big App Store categories starting with the best iPhone software and continuing with the top iPad app and game of 2017. macOS apps and games have also a winner for 2017, as well as the watchOS platform for the Apple Watch and tvOS for Apple TV.

On top of that, Apple has also disclosed the top breakout trends for new apps in 2017 which include, as expected. Augmented Reality (AR) apps and games like FishingGO, IKEA Palace and magicplan, Sky Guide AR; real-time competitive gaming featuring Stormbound, Battle Bay and Modern Combat Versus; mental health and mindfulness related apps like PAUSE, Sway and Mind Journey; and art related apps like Bloom-Coloring Book and PicsArt.

App Store Best Of Apps And Games Of 2017

App Store Best Of 2017 Top Apps & Games Charts
After checking out the best iOS software of 2017 according to Apple, also check out the most downloaded apps and games of the year. Tap the links available below and you will be redirected to the appropriate charts. Tap without hesitation, because no matter what iOS device you use, iPhone or iPad, the corresponding charts will be opened!

Related: Check out the Top 20 most downloaded iPhone apps and games of 2017, as well as the Top 50 iTunes Movies and TV Series of the year!