2 Quick Tips To Stop The Screen Recording On Your iPhone 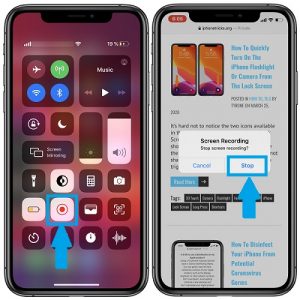 Trick to stop iPhone screen recording without altering the capture.

Starting with iOS 11, iPhone and iPad user have the option to screen record their device. This is very useful when you want to save data, create tutorials or simply show what’s playing on your smartphone. When you start a screen recording session you have three seconds to display the app that you want to record. However, to end a recording most of us use the same start/stop recording icon available in the Control Center.

I have some good news though. There are two other more clever ways of ending a screen recording on your iPhone, without having to disturb the actual recording. This saves time, because you won’t need to edit the video anymore and cut out the screen recording shutdown part. There’s no need to swipe for the Control Center anymore, because we bypass that step!

How To Easily Stop Screen Recording on iPhone 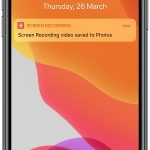 B. With A Press
Repeat steps 1 to 2 from the above tutorial. To stop the recording, proceed as follows:
Press the Side Button of your iPhone, also known as the Sleep/Wake button on older models.
Fact: This action will automatically lock your iOS device and end the recording. As you can notice, it’s the fastest and most straightforward way to stop the recording, without any other taps on the display.
Next: Wake your iPhone and you will find the “Screen Recording video saved to Photos” prompt, displayed on the screen.
Tip: Swipe-right on the notification and the recording starts playing!

Related: Tip to quickly turn on the Flashlight from the Lock Screen!