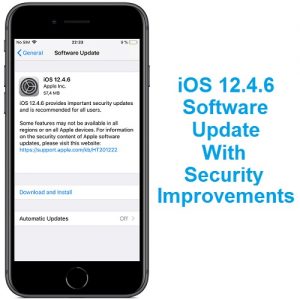 Although the iPhone 6 and older models aren’t compatible with iOS 13, they aren’t fully forgotten by Apple. The Cupertino-based tech giant has also rolled out iOS 12.4.6 alongside the new iOS 13.4, which we covered yesterday. This iOS 12 increment is only available for specific older iPhone, iPod and iPad models, which as expected, aren’t compatible with iOS 13. This update comes with important security improvements. It doesn’t add any new features, but it’s highly recommend if you’re still using an older iOS device.

iOS 12.4.6 is available over-the-air in the Settings app. Just make sure that your iPhone is connected to a Wi-Fi hotspot and browse for General -> Software Update. Tap on Download and Install. Provide the Passcode, confirm that you want to upgrade and wait until the new version is downloaded and unpacked on your device. The iPhone will automatically reboot when ready.

iOS 12.4.6 Update Log
In the Software Update screen Apple informs that his new version “provides important security improvements and is recommended for all users.”
There is no other extended update log or no other mentions, meaning that no new features have been added besides improved security.
Size: You can tell that the update is a minor one from the size of the file. Under 60 MB.
The security content of this update is available at: https://support.apple.com/kh/HT20122

Do you still daily use an iPhone 6 or older version? Let us know in the comment section available below!