3 Reasons To Wear The Apple Watch On Your Left Hand 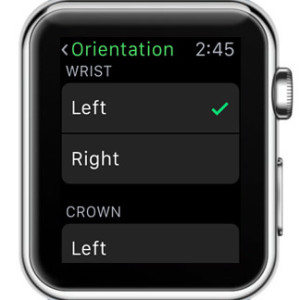 You can see watches worn both on the Left or Right wrists. However, we can all agree that the majority of people strap their timekeeping device on the Left hand. From my own experience and observance, those included in the right hand wearing minority, are either females or left handed individuals. From the utility point of view, the logic explanation of using the timepiece on the left hand is that you need the main working hand (the right arm in this case) free. This way you’re not disturbed from your activity, while you inform yourself about the current time.

Considering that various researches offer left handers a share between 8 – 20% from the world’s population, we can easily conclude why wearing a watch on the left wrist is the popular choice. What about the Apple Watch though? Can the same explanation be used for a smartwatch? The answer is Yes. On top of that, here are are a couple of extra reasons for why you should wear the Watch OS device on your left wrist, no matter if you’re right, left handed or ambidextrous!

How To Change Apple Watch Orientation 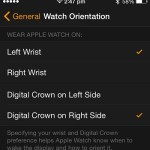 First of all you might wanna ask yourself if the wearable can be configured to be used on both wrists?! Apple has obviously considered this aspect and you’re asked to confirm, which wrist you use for wearing the device, as soon as you set it up and pair it with the matching iPhone. Watch OS uses your selection to determine the display’s orientation. It also helps your wrist gadget to determine when to wake the display. If you start wearing the Watch on your right hand and wish to switch for the other arm later on, you can edit the Orientation selection from the Apple Watch menu or its app on your iPhone.
Tap the Settings icon on your Watch’s app bundle. Choose General and go for Orientation. Here you can tweak Wrist as well as Crown placement.
To edit the same options from your iOS device, open the Apple Watch app and browse for My Watch -> General -> Watch Orientation.

Should I Use Digital Crown on Left or Right?

As you might have already noticed the Watch Orientation settings allow you to strap the timepiece in two ways on each hand. You can either have The Digital Crown on the upper Right side, the default recommended position, or turn the smartwatch upside down and bring the Crown on the lower left area. However, having the side buttons on the left side, while wearing the Watch on the left hand and vice-versa, is quite uncomfortable because your index finger hovers over the display, limiting your view. More, from my point of view turning the Digital Crown feels more natural when the button is located towards the higher end of the Watch case and not lower towards the bottom.

When you unbox Apple’s wearable, you find the smartwatch and its bands configured for using it with the Digital Crown on the Right side. If you do decide to switch for the left Crown orientation you can switch the two straps between each other. This way the wristband fastening system works in the same direction, as it does when using the Watch with the side buttons on the left side. Detaching a belt is performed easy, by pressing the small band release button available on the back of the Apple Watch. In the same time slide the strap out of position. Repeat the process for the other half too. Switch them between each other and slide them back in, until they snap in to place. You don’t have to without press the removal button anymore. 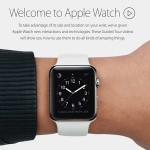 Many of us are used to following stereotypes and if you’re right handed or ambidextrous the balance for wearing the Watch on your left wrist is easily inclined, by the fact that this is how the majority of people uses the device and so should you.
I’ve seen even true left handers using the timepiece on the same wrist, only because this is how most of their friends do it. However, I encourage you to read on and discover more reasons for wearing the Apple Watch on the Left Wrist.

2. Digital Crown and Side Button Placement 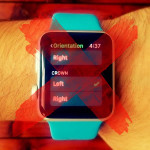 You can notice from all Apple commercials and promotion materials that the Watch was designed for left hand wearing. As mentioned above, the Digital Crown feels best tweakable when it’s placed in the upper side of the Watch case. It can only be available in that location, if it’s oriented towards the right side of the case. Further on, this configuration is ideally used on a Left Hand! If you have the Crown on the right and wear the watch on the right wrist, you’ll partially cover the display and limit your visibility when turning the Crown with your left index finger! 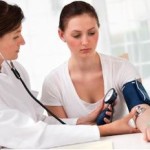 If this is not enough, try to remember what hand your family doctor uses, when he’s monitoring your pulse or measuring your blood pressure.
Yep, it’s the left hand and that’s because the heart is placed on the left side of your body, making readings from the same side more accurate.
The same applies for the Apple Watch, when it comes to its health tracking features.
If you want to help your wearable detect heart beats easier and thus provide highly accurate heart rate readings, you have to wear it on your Left Hand!