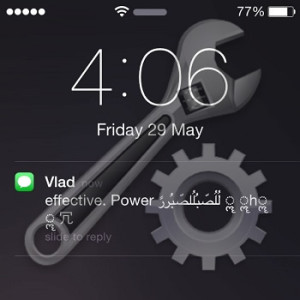 Apple apparently did not have plans to release an iOS update to soon, although iOS 8.4 has been quite heavily beta tested. That’s because we where anticipating a rushed out new iOS version, a few days ago, when the Unicode Message-gate broke out. The Cupertino-based company has instead decided to issue a temporary fix, for the iPhone crashing Unicode string. Yes, this is about that strange character array again, that speculates and iOS Notification rendering bug and leads to iPhone crashes and locks users out of the built-in Messages app.

Apple’s fix practically teaches you how to get rid of the error after you experience it, but doesn’t prevent it from re-occurring. As you know, prevention is always better and it seems that it will be only available with the next iOS update. As we already mentioned in our detailed How To Fix The iOS Unicode Bug article, just hours after the whole madness started, you’re currently able to immunize your iPhone against the “effective. Power [unicode string]” attack, by completely disabling Message notifications. However, this isn’t a proper solution, because it takes away a lot from your smartphone’s functionality.

Apple’s Temporary Unicode Bug Solution
But let’s get back to the official fix for the iPhone crashing malicious message. Apple recommends that you declutter this problem with the help of Siri: 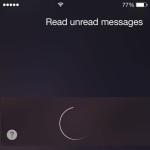 – Step 1: Press & hold your iPhone’s home button to wake the virtual assistant.
– Step 2: Ask Sir to read out the unread messages for you, using the syntax: “Read unread messages!”
– Step 3: After Siri finishes “reading” the undecipherable Unicode string, it will ask you if you wish to Reply to the message. Accept your virtual assistant’s proposal by speaking out: “Yes!”
– Step 4: Say anything, the content of the response doesn’t matter, but will be received by your offender. You can tell him to quit playing pranks or anything else that you find adequate.
Step 5: After the reply is dispatched you’ll be able to access Messages again. Slide left on the offender’s conversation thread to delete the entire message exchange, or open the thread and delete only the buggy “effective. Power [unicode string]” text, by taping on the iMessage, choosing More and deleting the entry from the thread. For more info please check how to delete messages from iOS conversations.

Tip: Stay tuned with iPhoneTricks.org and we’ll updated you as soon as a new iOS version, that permanently fixes this message vulnerability, is released!