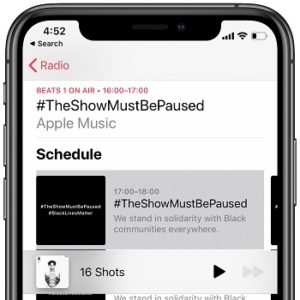 Have you opened Apple Music on your iPhone or iPad and have been prompted with a message that promotes solidarity against racism and injustice of all kinds? You’re not the only one. If you live in the U.S. you have to know that Apple Music has joined the Blackout Tuesday campaign. It’s an effort made by the music industry to support the black community after the unfortunate event that caused the death of George Floyd, a citizen from the black community of Minneapolis that was killed by a police agent during the course of his arrest.

To raise awareness about resurfacing racial problems in the United States Apple Music prompts it’s user with the #TheShowMustBePaused and #BlackLivesMatter hashtags when browsing the For You, Browse and Radio tabs. Users are encouraged to join the campaign and listen to a special Beats 1 music stream that celebrates the best of the black music. 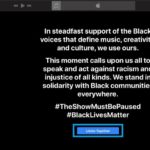 Below you can read the Blackout Tuesday campaign message displayed in Apple Music.
Fact: This message is displayed only for U.S. citizens.

“In steadfast support of the Black voices that define music, creativity, and culture, we use ours. This moment calls upon us all to speak and act against racism and injustice of all kinds. We stand in solidarity with Black communities everywhere. #TheShowMustBePaused
#BlackLivesMatter”

Important: The Apple Music Library and Search fields are unaffected by the Blackout Tuesday campaign. Users are able to access their favorite songs and uncover new tracks!

Beats 1 #TheShowMustBePaused Stream
If you’re not browsing Apple Music from the United States you can only spot changes in the app’s Radio section. The Beats 1 schedule has been schedule has been cancelled for today. The only show that’s airing today is called #TheShowMustBePaused.
The description of the show is: “We stand in solidarity with Black communities everywhere”.
How To: Tap the name of the show and the best of black music will start playing on your iPhone, iPad or Apple TV!

Related: Do you know that you can download the Apple Music app on your Samsung TV?