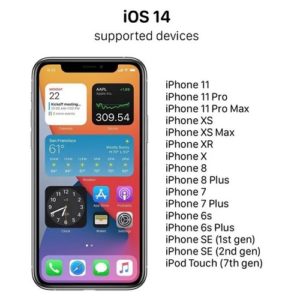 iOS 14 has been announced as expected during the keynote of WWDC 2020. The two sources (1 and 2) have leaked correctly. The 14th iOS generation is compatible with all iPhones that are able to handle iOS 13. If you’re an iPhone 6S or iPhone 6S Plus owner you should be thrilled by this news. It ensures that your device will remain up to date for one more year! The same goes for the first generation iPhone SE owners.

iOS 13 is currently compatible with 15 iPhone models starting with the 2015 released iPhone 6S and reaching all the way up to the most recent release, the iPhone SE second generation. Considering that Apple plans to release four models in the rumored 2020 iPhone lineup, we can easily assume that iOS 14 will be able to run on 19 different iPhone models on launch day. That’s a premiere for Apple’s smartphone OS!

Update: Apple announced iOS 14 and confirms that it supports all previous iPhones compatible with iOS 13!

There is less certainty when it comes to the iPad. IF the same applies for Apple’s smart-tablets and iPadOS 14 will support all iPads that can host its predecessor the new operating system will work on:

iOS 14 will be released to the general public in the fall of 2020. However, you can install a test version on a compatible iPhone or iPad earlier.
Update: iOS 14 has been announced during the WWDC 2020 keynote. The first Developer Beta has been released. It’s officially restricted to paid Apple developers. However, there is a workaround and anyone can install it.
Disclaimer: It’s not recommended to install iOS 14 in its early beta test stages, because it will contain lots of bugs and your iPhone will be less efficient in terms of battery life and other performances.

Do you plan to install the iOS 14 beta on your iPhone or you prefer to wait for the official fall release? Let us know in the comments section available below.