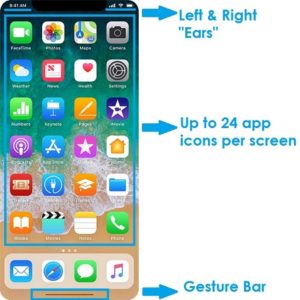 The absence of a physical Home button and the hyped split status bar that accommodates the edge-to-edge display, of the 10th anniversary iPhone, are the main reasons while Apple fans are curious about how the iPhone X Home screen will look like. Thanks to graphics designer Olivier Charavel and our colleague Patricia you can now take a look at a Home screen render of an iPhone X running iOS 11. This is most likely the real deal!

Notice, that the split status bar comes with two display areas, left and right, nicknamed as the iPhone’s ears. The left ear displays the current time, while the right one contains info about carrier Signal strength, Wi-Fi connectivity and Battery indicator. It will be interesting to find out how Apple’s designers have chosen to display the rest of symbols usually found in the status bar, like Bluetooth connectivity indicator, Auto-Lock rotation, Bluetooth accessory battery and many more.

iPhone X Home Screen Layout Facts
– Split status bar, described above.
– The main screen will feature 6 rows for app icons, each one being able to accommodate 4 app icons or folders. That’s a total of 24 slots.
– The iPhone will borrow one more feature from the Apple Watch and that’s the Dock! After, importing the Raise to Wake and Tap to Wake features, it’s time for the Dock which can accommodate up to four apps that are often used.
– The Gesture Bar is represented by a thin horizontal line, displayed right above the lower bezel. It facilitates access to a series of gesture shortcuts that plan to fill up the void left by the elimination of the Home button.

Tip: The Dock might be accessible with a swipe up gesture, from the bottom of the screen.