With no physical Home button available on the 10th anniversary iPhone, new ways of waking up the phone are anticipated. Raise to wake, borrowed from the Apple Watch and added in iOS 10 to the iPhone 7 and iPhone 7 Plus will become one of the most used features. However, it’s highly likely that the iPhone 8 will also borrow the Tap to wake gesture from its main Android competitors. Code found in the HomeKit firmware confirms Apple’s intentions.

This way you will have two options to light up the OLED display. Either pick the smartphone from your desk and raise it, or simply tap the screen to check the time and see if there are any missed notifications. Whether you will have to tap the 2017 Apple flagship once or twice to use the Tap to Wake gesture is unclear yet. We have to wait and see. The good thing is that we’re only a couple of days away from the edifying September 12 keynote. 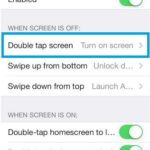 Tap To Wake Jailbreak
It’s true that some iPhones are able to wake up when they are double-tapped but this feature currently requires jailbreaking and comes with a series of downsides. First of all, a jailbroken iPhone will never run the latest iOS version and will be exposed, security wise. Secondly, because this isn’t an optimized native feature, it will deplete your iOS device’s battery very fast. We don’t encourage this solution but if you insist go ahead and install the SmartTap Cydia app.

Fact: The absence of a physical Home button could be compensated by a digital Home Indicator. Nevertheless a series of gestures like double-tapping Home button for App Switcher, performing a screenshot and many others will have to find a replacement. It’s true that you can used 3D Touch to enter App Switcher menu.