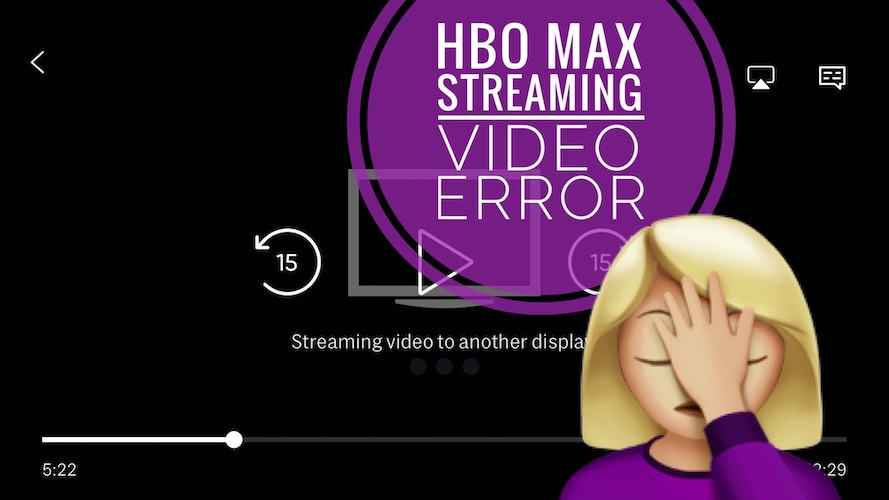 Are you getting the Streaming video to another display / device error when trying to watch HBO Max content on your iPhone or iPad? Does the issue occur when you connect your AirPods, to listen to audio or any other Bluetooth headphones?

Streaming Video To Another Display Error

This issue has been reported by Kevin W. on our AirPods Pro 4A402 review page:

“When I use HBO Max, every time I use my AirPods with the updated firmware, the following message is displayed in the center of my screen while the show is still playing, ‘Streaming video to another display’.”

“as soon as I disconnect the AirPods and simply use my iPhone speakers, the message goes away.”

Streaming Video To Another Device Error

I’ve found a similar report on Reddit, that’s also very recent and seems identical with the one described above:

“I’m trying to watch (HBO Max) on my phone, I connect my airpods and there’s an annoying message on the screen that reads “streaming video to another device” but I’m just watching on my phone. Can I not listen to it with headphones on?”

It’s unclear yet if this issue is caused by a HBO Max app bug, or by a glitch that found its way in the new AirPods Pro 4A402 firmware.

Help us pinpoint the cause by sharing your feedback in the comments section. If you own a pair of original AirPods or AirPods 2, or any other Bluetooth headphones and get the same error, it means that the issue is caused by the recently updated HBO Max app.

If HBO Max streaming on iPhone works without any errors with version 50.60.0, the problem might be related to the new AirPods firmware.

Update 1: According to the detailed feedback received in the comments section, the Streaming video to another display error is caused by a bug that found its way in the HBO Max app version 50.60.0.

The fix has been confirmed to us by WarnerMedia’s Corporate Communications department:

Can you also confirm it in the comments section, after performing the update?

How To Fix HBO Max Streaming Video To Another Device Error

Update: The official fix is now available. Manually force HBO Max to update in the App Store. You have to download version 50.60.1 or later.

here is what you can do to get around this annoying error message:

Obviously, the first step is to use your iPhone’s or iPad’s speaker when streaming content on HBO Max and avoid connecting the AirPods for the time being.

Fact: Apparently this issue occurs on most Bluetooth headphones. If available, you can try to use wired headphones and see if you can bypass the issue.

If you get the Streaming video to another display error on iPhone, try to watch on iPad and vice-versa.

If the issue is generated by a bugin the new HBO Max 50.60.0 version, one of your other devices might run the older version and you can listen to AirPods Pro without experiencing the issue.

Have you managed to fix HBO Max Streaming video to another device error? Do you have a better workaround? Use the comments section and share your feedback.

Related: Here is how to make AirPods Pro MagSafe compatible.