Heads or Tails? Siri Can Flip The Coin! 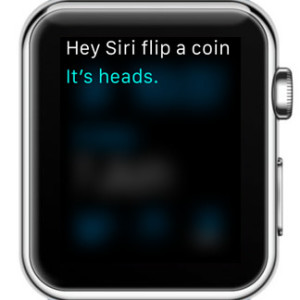 Apple’s virtual assistant can handle many tasks and be really helpful, when you wish to command your iPhone or iPad. Siri’s upgraded version, run on Watch OS, is even more accurate and impressive. However, it’s the small things that make the difference between Apple and the rest of mobile and wearable manufacturers. Today we happened to uncover that Siri can virtually toss the coin for you, if there’s no physical one available.

So, whenever you’re undecided, or you need to flip the coin to determine a winner, or randomly solve a task, you can ask Siri to help you out. Feature works the same on iPhone or Apple Watch. Use “Hey Siri” on your wrist gadget, or press and hold the home button until the iOS virtual assistant wakes up and speak out a similar syntax to: “Flip the (a) coin!” 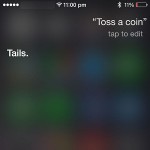 Do note to choose the side of the coin, before you command Siri to flip it. The virtual assistant will instantly display a result, once you ask for the favor. I’ve tried this several times and Siri really knows to mix the result up. The virtual coin toss is perfectly random. From time to time, it will also play a few jokes on you and come out with neutral results, like: “It’s…oops, it fell in a crack.”
Repeat the process and you’ll have a decision. The standard replies are: “It’s heads.” or “Tails.”, but you could also be prompted with a more colorful result like: “Rosencrantz says heads/tails.” Yes, Siri likes to show off from time to time! 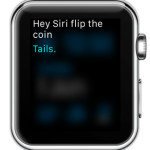 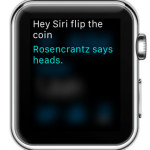 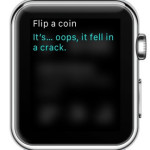 Ask Siri To Roll A Dice 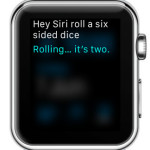 Flipping a coin is not the only cool thing that Apple’s virtual assistant is able to do. It can also roll a dice for you. Use the command: “Roll a six sided dice!” and Siri knows what to do.
Do note, that if you only shout “Roll a dice!”, you’ll end up with a joke an no helpful answer.
We’ve also tried to let Siri roll two six sided dices for us. But it’s currently not able to handle the request. It returns the same answer each time: “One and one…snake eyes!”