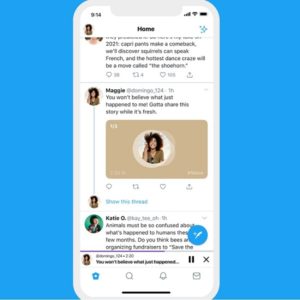 Twitter has announced and released a new feature called Voice Tweets. this means you can tweet with your voice and post voice messages instead of text, from your iPhone, iPad, Mac or any other smartphone and computer that is equipped with a microphone. Voice tweets can be up to 140 seconds long. However, a continuous recording option allows you to speak out even longer and the voice message will be broken down into multiple tweets.

Twitter posts have evolved over time. The original tweets supported only text format. But over time they gained photos, videos, gifs and extra characters. Tweet length has also been increased from the original 140 character limit, that was specifically imposed to allow tweets to fit into SMS messages, to the 280 character limit back in 2017.

How To Get Voice Tweets

Audio tweets have just started to roll out. Make sure that you update to the latest Twitter app version for iOS (App Store update link) or whatever platform you’re using.
Similar to many new feature the voice tweets will roll out progressively. Some users will get them faster, but everyone should be able to enjoy them in a couple of weeks.
Stay tuned, if we find a hack that helps you to get them faster we’ll update this article. 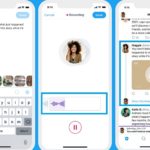 1. In Twitter, open the tweet composer.
2. Tap the new wavelengths icon. A screen with your user’s icon is displayed.
3. Tap the Play button and start recording your voice tweet.
4. Pause the recording. Review your audio and post the voice message when ready.
Fact: Voice tweets show up on your timeline in Twitter just as regular tweets.

Tip: Mixed tweets are accepted! As with the case of text and images, or text and videos, now you can also post both text and voice message in the same tweet!

– Listen to an audio tweet by tapping the image.
– in iOS playback is handled by an audio player that’s positioned at the bottom of the timeline window. This allows users to continue scrolling while listening. You can pause a voice tweet and even close it before it ends if you don’t want to listen the whole audio message.
Tip: Audio tweets will be labeled with the #Voice hashtag.

This is an important change for Twitter and it will surly cause mixed feelings. What’s your take? Do you think that the new Voice Tweets feature is a welcomed addition? Let us know in the comments section available below.