How To Use The iPhone Home Screen Clock Widget (iOS 14)

iOS 14 finally brings widgets to the iPhone Home Screen. The feature is available for both stock iOS apps as well as third party applications.
At the time of writing iOS 14 is currently in its beta testing stages. The public release is scheduled for this fall and we expect mostly widgets from stock apps to support Home screen placement.

The Clock widget is one of them. It comes in three sizes and can display the time in one and up to four cities from around the world.
The glance can be added directly from the Home screen and placed on any app page. The small size provides a compact view of the time from four handpicked cities.
You can also tweak it to show a single time zone in expanded view. The medium size widget, a large rectangle, lists four clocks in a horizontal layout.

How To Add The Clock Widget 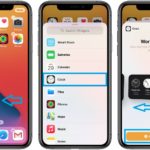 1. Browse to the iPhone or iPad Home screen.
2. Long-press the Home Screen to enter edit mode.
3. Tap the ‘+’ icon, available in the top-left corner of the screen.
4. Scroll for the Clock widget and tap it.
5. Swipe-right to choose the desired widget size & layout.
6. Tap on ‘Add Widget’ while displaying the desired widget size.
7. Hit ‘Done’, top-right corner, to exit the Home Screen edit mode and save the changes.

How To Edit Clock Widget Cities 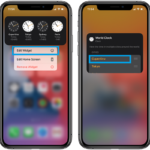 When you first add the widget it comes with a series of default pre-selected cities like: Cupertino, Tokyo, Sydndey, Paris. To edit them check the following steps:
1. Long-press the Clock widget until the quick actions menu pops up.
2. Tap on Edit Widget.
3. Tap the ‘name of the city’ that you want to edit.
4. Use the Search field to find the new city.
5. Tap the name of the new city and the change is made.
Tip: Long-press the three horizontal lines next to the city name and drag & drop the city higher or lower in the list to tweak the display order.

1. Change Position – to edit the location of the Clock widget on the iPhone / iPad Home screen you have to long-press the glance to enter the edit mode. Next, drag & drop the widget to the desired position.

2. Delete Widget – to remove the glance from your Home Screen long-press it until you bring up the quick actions. Tap ‘Remove Widget’. Tap ‘Remove’ one more time to confirm that you want to delete the Clock widget.
Tip: To remove multiple widgets you can long-press the Home Screen and enter edit mode. Tap the ‘-‘ icon that hovers in the top-left corner of the widgets that you want to delete.

3. Change Widget Size – at the time of writing you can’t edit the size and shape from the widget edit menu. You have to remove the glance and add a new Clock widget if the desired size.

4. Open World Clock – tap the Clock widget to bring up the World Clock tab of the Clock app. From here you can easily navigate to Alarm, Stopwatch and Timer. 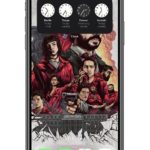 Unless you work in the travel niche, you might find the large Clock widget not useful.
However, if you’re a fan of the popular Netflix TV show, Money Heist you might be want to create a Clock widget layout that’s in theme with the show.
In Money Heist the names of the popular characters have borrowed the names of large cities from the world, to mask their true identities. Pick four of your favorite characters and edit the Clock widget cities to match their names, as shown in the screenshot available nearby!
Tip: The rectangle Clock widget is the optimal size for this trick. The other two small templates abbreviate the name of the cities.

Do you use the Clock widget on your Home Screen. Have you found other tips not mentioned here? Let us know in the comments sections available below!

Related: How to edit the Home Screen Weather widget location in iOS 14 / iPadOS 14!