How To Use The New iPhone Translate App In iOS 14 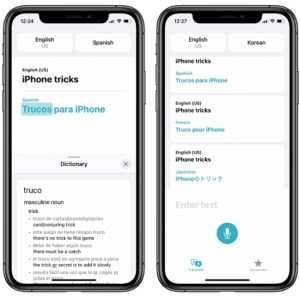 iOS 14 adds a new stock app to the iPhone and iPad. It’s called Translate and aims to become your default application when you need to interpret between languages.
Apple advocates for privacy when marketing its new translation software.
The iOS 14 Translate app can be used at full potential on-device, without requiring an Internet connection, thus guaranteeing that all you requests remain private.

On top of this, the new Translate app also features voice translation, dictionaries, an attention mode and more. The most interesting though is the conversation mode.
It can automatically detect which language you’re speaking and translate sentences into a pre-selected language. 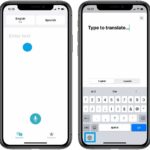 This is the most basic translation mode. All that you have to do is open the app. Tap on ‘Enter text’ and start typing the word or the phrase that you want to translate. Hit ‘Go’. The translation is displayed below the original phrase.
Fact: You can edit the translation languages by tapping on the language name and selecting a different one from the available list.
Tip: All languages have their keyboards included for text translations. There’s no need to separately download them. Just tap the ‘Globe’ icon, available in the lower-left area of the keyboard to switch keyboards between the two selected languages. 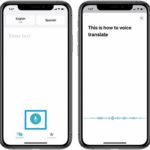 Allows you to dictate the word, phrase or sentence that you want to translate. Simply, tap the ‘microphone icon’ and speak out.
The app detects your language and returns a text and audio translation for the pre-selected language.
Tip: The audio translation is played by default. Make sure that you won’t disturb others when using this feature.
This feature also works offline if the required languages are downloaded on your device, as described below. 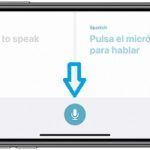 Rotate your iPhone to landscape orientation and you’ll automatically bring up the Translate app conversation mode. The screen splits in half and displays text from both sides of the translation.
Tap the microphone to dictate!
The automatic language detection feature recognizes the spoken language and translates it in real-time. Both the original and translated text are filled in their respective sides of the screen. Translated audio is also available of course. 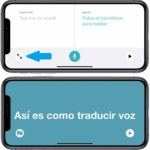 From the conversation mode you can also trigger the Attention mode.
Tap the ‘full-screen icon’, available in the lower-left corner of the screen.
The translated phrase is enlarged and displayed on the entire screen. It becomes easier to read and you can show it to your foreign conversation partner.
Tip: If the Conversation or Attention modes don’t open, you have to check the iOS Portrait Orientation Lock setting. Open the Control Center and make sure that the Portrait Orientation mode toggle is in the ‘OFF’ position.

You’re not sure about the meaning of a specific word? Tap it and you’ll get the definition of the word in the built-in dictionary.
Tip: Tap the ‘x’ to close the dictionary and get back to the standard view.

How To Enable On-device Translation Mode 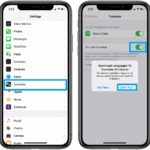 You can use all the Translate app features, without connecting to the Internet. This way you make sure that you translations remain private.
Download the language packs that you intend to use and enable the on-device mode from Settings.
1. Open the iOS or iPadOS Settings app.
2. Tap on Translate.
3. Enable the ‘On-device mode’ option.
You’ll be redirected the the Translate app and asked to download the needed languages to enable offline usage. 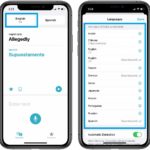 1. Open the Translate app on your iPhone or iPad.
2. Tap on one of the two languages displayed at the top of the app’s Home screen.
3. Tap the ‘download icon’ (downwards pointing arrow), available next to the label of the language that you want to save for offline translations.
4. Be patient until the selected language pack is downloaded. The ‘installed’ label will display when ready.

Tip: You need both languages used for translations to be downloaded for on-device mode to work!

How To Display Recent Translations

If you did not manage to save a translation as favorite and you want to review it, you might be able to find it in the Recent Translations sections.
Swipe-down in the Translate app home screen to display your recent queries. Tap it to review it or swipe-left to unveil quick-actions like delete from the list and favorite/unfavorite.

Sometimes you might want to share a translation because it’s time consuming to type the same phrase in a foreign language if you don’t have the appropriate keyboard available. In this case you can simply copy/paste the text or use the iOS sharing feature:
1. Long-press on the translated text to select it.
2. Tap on the ‘Share…’ option.
3. Chose the communication channel that you want to use to share the text.

How To Fix Translation Unavailable Error 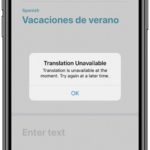 If the Translation app informs you that ‘Translation is unavailable at the moment. Try at a later time.’, most likely you don’t have an Internet connection.
If the languages used for the specific translations aren’t saved for on-device usage and the iPhone or iPad has temporary lost web connectivity.
Check your WiFi and Mobile Data signal and try again.

What’s your feedback about the new iOS 14 Translate app? Found any other features that we should mention in this article? Use the comments section available below and let us know.

Related: Dictionaries are available on your iPhone even outside of the Translate app. Check out how to enable and use them here!