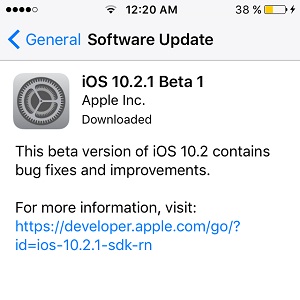 Only three days after the public release of iOS 10.2, Apple’s in house programmers started working on another minor iteration. The iOS 10.2.1 Beta 1 is up for grabs for those iPhone and iPad owners that are enrolled with the Apple Beta testing program. If you never installed an iOS test version on your Apple smartphone, don’t panic. Public betas are free and everyone can try them out.

However, don’t expect to gain access to any important change. Three figure iOS version iterations are usually focusing on performance and stability improvements. Considering that 10.2.1 comes so soon after the significant iOS 10.2 roll out, makes it even less prone to implementing new features or significant changes. The keynote doesn’t unveil too much either. It advertises the traditional “bug fixes and improvements”.

How To Install iOS 10.2.1 Beta 1
This test version was first released for Developers only, but it also became available for public testing a few hours later. To install it on your iPhone or iPad you need to own the iOS 10 Beta Profile on your device. This package can be downloaded from Apple’s official Beta Software Program.
After grabbing the profile beta updates become available over-the-air as the regular public releases. Open Settings, from your iPhone’s Home Screen and browse for General -> Software Update. Once the iOS 10.2.1 Beta is identified, hit Download & Install. Be patient until the update is completed and your device reboots automatically.

Tip: Always backup your device via iTunes or iCloud before performing an update, especially if we’re talking about a Beta version!

iOS 10.2.1 Beta 1 Changes
Our tests haven’t currently revealed any visual changes coming with this version. This is most probably the case of under the hood changes that aim to make your iPhone more secure, stable and efficient.
If you’re also an active beta tester and noticed anything new, don’t hesitate to comment don’t below and share your findings with all iPhoneTricks.org readers.