Apple has accelerated the iOS 11 beta testing process releasing Developer Beta 6 and Public Beta 5, just one week after the seeding of the previous update. Until now, test version for the 11th iOS generation have been updated every two weeks or more. However, with less than 1 month until the expected official launch of iOS 11 the Cupertino-based tech giant aims to fine tune the firmware that will be unveiled along the iPhone 8, iPhone 7S and the iPhone 7S Plus.

iOS 11 Beta 6 doesn’t bring too many spectacular changes compared to its previous version. Most spectacular new features have been unveiled in the initial version and these later stages are fine tuning the functionality. It brings instead a series of bug fixes, stability improvements and overall performance enhancements. Among the minor visible changes we can notice a redesign of the stock Maps and App Store icons as well as bolder numbers within the Clock icon. Maps showcases the location of the new Apple Park headquarters. 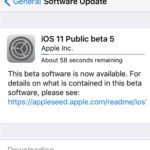 Download iOS 11 Beta 6 Update
1. If you’re already involved in the iOS 11 beta testing, you can grab this latest version over-the-air. Open the Settings app and browse for General -> Software Update. Download and install the new test version as you regularly to with a public iOS software update.
2. In case your iPhone or iPad is sill running iOS 3.3.3 or earlier, you need to install the iOS 11 Beta Profile first and than proceed with the update. Here is a complete step by step tutorial that will help you out!

iOS 11 Beta 6 Changes
Here is a list with the visual changes that we detected so far, when comparing with the previous test version:
– Redesigned Maps and App Store app icons.
– Clock app icon contains bolder numbers.
– Auto-Brightness setting is now available in the Accessibility -> Display Accommodations menu instead of Display & Brightness submenu.
– AirPods have a new animation.
– Now Playing AirPlay indicator is blue during playback.