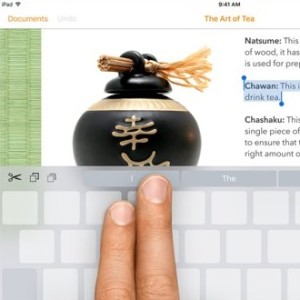 Moving the cursor around your iPhone’s screen is much more easier in iOS 9. With the previous versions you had to press, hold & drag the cursor in the desired position. This is still available, but selecting a text, editing and moving it has become much more easier. In the previous iOS versions, your finger could obstruct view and performing an accurate text selection from the first attempt could prove itself difficult. Displacing the cursor, between characters, to mark the end of the selection, could often end in failure

However, a new gesture trick, introduced in the 9th iOS generation, comes to solve this shortcoming too. You can now control the keyboard cursor, by simultaneously placing two fingers on your iPhone’s or iPad’s screen and dragging them along, until the pulsating bar reaches the desired location. Release your simultaneous press when you manage to pick the desired paragraph and tweak the selection accordingly. 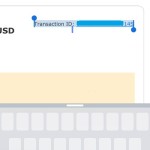 Check the screenshot nearby and see how easy is to select, tweak and move text by dragging two fingers on your Apple gadget’s screen. The great thing is that you can perform this gesture trick anywhere on the display, even above the keyboard. As soon as you touch your iPhone’s or iPad’s screen, with two fingers, the keyboard enters standby mode and you can hover it with your fingers without typing characters.
Fact: Apple advertises this gesture trick as an trick for the native iPad app, but the tip works on your smartphone too.

Other iOS 9 Keyboard Enhancements
I can also inform you about the Shortcut Bar which is a new tool of the iOS stock keyboard. However, this one is only available on the iPad, because of the device’s bigger screen size. This field with additional text editing buttons brings famous buttons like: Bold, Italics, Underline, Cut, Copy and Paste, near the other standard keyboard icons. The Shortcut Bar can be tweaked for third-party apps too.
Another keyboard addition with iOS 9 are some more shortcuts provided by third party accessories, like wireless keyboards. They will be able to support features like switching between apps and many other app personalized shortcuts.
Fact: By the time iOS 9 will be released to general public, these features could also be available on the iPhone 6 Plus and the new Apple flagships released in the autumn of 2015.