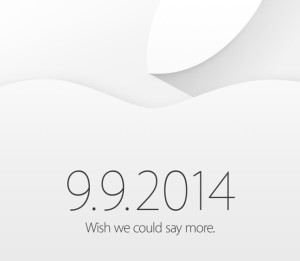 Apple have recently released a teaser regarding the highly anticipated release date of their new iPhone generation.

The Cupertino headquartered company sent invites for a ‘Special Event’ scheduled on September 9, 2014 with the tagline: ‘Wish we could say more!’

Honestly, you can’t expect more than that when it comes to Apple and their misterious unveiling ceremonies.

We are certain that this the official release date of the iPhone 6, the newest Apple flagship!

iPhone 6 Release Facts
There are several reasons to anticipate that this will be a special unveiling ceremony and that the iPhone 6 will be a ground-breaking device:

1. Apple has selected Flint Center as the adequate location for this event. One can only notice that the company is returning home, exactly 30 years later, after Steve Jobs announced the Mac to the world!
2. September 9 is an ordinary Tuesday. However if we look at the figures:…boom 9/9! I can notice two sixes laying upside down. Could this represent the launch of two different iPhone 6 models? Rumors state that Apple will unveil 4.7″ and 5.5″ iPhone 6 models!
3. One could explain the strange sinusoid at the top of invitation, to stand for the bracelet of the first wearable device manufactured by Apple, the iWatch!
4. Not sure if I need to emphasize this but I would translate ‘Wish we could say more!’ with ‘YOU SHOULDN’T MISS THIS!’.

iPhone 6 Upgrades & Features
Most rumors and leaks confirm that the iPhone 6 will be a totally new product and not an edit of the 5S. Here are some of the most important upgrades and features that will be found in Apple’s new flagship:
– most important and first noticeable change is the size. As mentioned above display size will increase significantly from 4″ to 4.7″ and even 5.5″ if there will be a 2nd iPhone 6 launched. Some believe that the phablet sized one will be called iPhone Air.
– the new iPhone 6 should be 5.9mm thin and have a Liquid Metal design.
– its Display should be made of highly resistant Sapphire Glass.
– Power Button will be relocated to the right side of the device, for better reach needed because of the increased size.
– Display could also be vibrating and incorporate Tactile Feedback Technology
– the iPhone 6 could have an interactive logo on the back side with LED notification feature.
– it’s extremely likely that near field communication (NFC) that could enable payments via iPhone, as well as other remote controlled options.
– iCamera will be improved to 13 megapixels from the 8 available on the 5S.
– iPhone 6 will run iOS 8 on a brand new A8 processor.

iPhone 6 Video
If you can’t wait until the 9/9 event you can take a look at the new iPhone 6. Watch our trailer available below and see how the latest Apple flagship looks like: