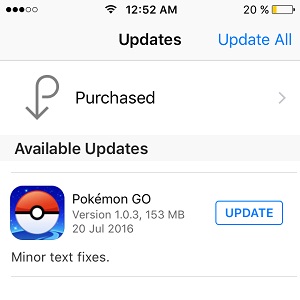 Niantic Inc. has just released the 1.0.3 update for the iOS version of Pokemon GO. Sadly, for many that expected a roll out aimed at fixing a few annoying game glitches, the log states “Minor text fixes.” This means that the gaming blockbuster isn’t receiving the much expected tracking fix. With the current heights that the pocket-monster hunt has achieved, I can only ask myself how much more pandemic Pokemon GO would be if the overloaded servers problem would have been avoided.

The three-step tracking bug mentioned above is also a pain in the a**, when you reach higher Trainer levels and focusing on adding new creatures in your PokeDex becomes more and more difficult. Getting back to this update, if you check the App Store and the upgrade fails to download when you tap on Update don’t be surprised. The huge amount of Pokemon GO users trying to grab the new version could cause a new wave of Apple server overcrowding cause by Pikachu and his horde.

When To Expect A Bigger Update
Pokemon GO has yet to receive an important update since its initial release on July 6. I assume that Nintendo and Niantic have focused on matching the user demand and adjusting server capacity to cope with the app’s massive success. However, it’s about time for sometime to take some time and correct the important glitches that prevent players from having a flawless gaming experience.

Tip: Until the next update you can only enjoy Pokemon GO as it is. Continue to level up and increase your Pokemon roster by following these 10 tips.