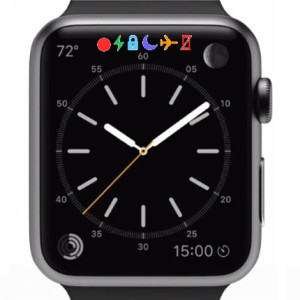 Contrary to an iPhone or iPad, the Watch doesn’t feature a permanent status bar indicator, simply because its screen is to small to fit one additional section of information. However, Apple’s in-house developers have found an efficient way to inform users about the state of the watch OS gadget. A series of status indicators have been implemented and are available to be displayed, whenever a change has to be signaled.

If the Apple Watch is in normal functioning state, doesn’t have any unread notifications; isn’t charging, locked or disconnected from the paired iPhone. Plus, no wireless download or active process is underway, then no status indicator will be displayed. Basically, the wrist gadget offers information about its state, when something that’s not active by default is ongoing or has happened and you where not around.

Watch OS comes with seven native indicators that reflect a change of the Watch’s state. The icons are displayed, centered, at the top of the screen. The show up only on Watch Face and Application views. Status information isn’t available on the home screen Carousel view.

Apple Watch’s Built-in Status Indicators
Many state symbols are similar to those familiar on iOS. They’re also pretty self-explanatory but here is how to act when you see each of the seven icons at the top of your smartwatch’s screen:

Notification – Probably one of the most frequent icons displayed on Apple Watch. It signals the presence of an unread notification. If you see the red dot at the top of your wearable, swipe down to unveil the missed notifications. Tap to enter and handle it.

Charging – Considering that you’ll probably end up charging your watch OS device every night, this will also become a very familiar indicator. Whenever you connect the Magnetic Charger to your Apple Watch the green lightning bolt will appear on its screen.

Loading – Your smartwatch has lots of wireless transmissions and active processes while paired to an iPhone. Always when one of these tasks are still unfolding, you’ll get the turning circle-formed bubbles icon at the top of your Watch Face.

Lock – You can lock the Apple Watch, to protect it while you’re not wearing it. The blue lock icon signals that you need to enter your device’s passcode to unlock it. It’s done the same way you use to on your iPhone if you’re not using Touch ID.

Do Not Disturb This symbol informs you that all your calls and notifications are silenced and won’t show up when incoming. Do not disturb mode can be enabled/disabled from the Settings app or glance, or even simultaneously from the iPhone.

Airplane Mode – Disables Bluetooth and Wi-Fi on your Apple Watch, making the gadget suitable for commercial flight usage (if allowed), or contributes to saving battery life. Read more about how to bring your Watch in stealth mode.

Disconnected – This indicator states that the smartwatch has lost connection with the paired iPhone. This usually happens when the iOS device gets out of Bluetooth range. Get back within 33 feet (10 meters) or use the Apple Watch offline.

Low Battery – Apple Watch battery is low status bar indicator.
You can opt for the Power Reserve mode when this icon appears on your gadget.
Introduced along with watchOS 2.

Water Lock – Your smartwatch is ready for water contact. When this mode is on the screen won’t react to taps.
This feature is only available for Apple Watch Series 2 models and later. Was introduced along watchOS 3.

Theater Mode – This icon signals that the Apple Watch Theater Mode is on.
This feature was introduced along watchOS 3.2 and silences your smartwatch and disables the activate on wrist raise setting, to avoid light and audio disturbance in cinemas.

Workout in progress
This watchOS status bar icon signals that a workout is currently in progress, via the Workout app.

The two Apple Watch connectivity icons. The first one confirms that the watchOS device is connected to its paired iPhone, while the other one indicates connection to known Wi-Fi network.