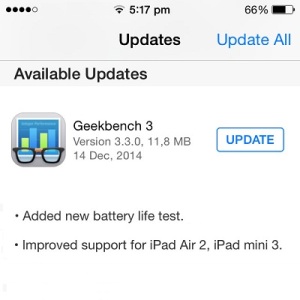 Your iPhone is one of the most popular portable gadgets nowadays. You are using it most of the time, while on the move, and this makes battery lifetime a very important asset. Uptime is directly influenced by your smartphone’s physical battery size and by iOS’ ability to efficiently use your iPhone’s hardware resources.

Apple has introduced, with the release of iOS 8, the built-in Battery Usage menu. It shows how long your device is running since last charge and which apps drain the most juice out of your lithium-ion cells.

However, there is still no built-in indicator that shows the real health of your battery. I’m not talking about the already familiar battery percentage indicator, but about a stat that shares how strong your battery is compared to a few months or years ago when it had its first charging cycles. 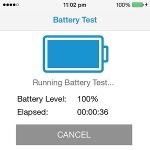 To find out this information, you need an app that runs benchmark tests and determines the actual strength of your iPhone’s battery. So, if you suspect that your device discharges faster than you where used to, you can download Geekbench 3 from the App Store and run a battery life test. Primate Labs have introduced this feature in their latest update, version 3.3. It simulates and stimulates your iPhone’s processor to run intensive applications, while measuring the time that your battery can sustain it’s work. The longer the time, the stronger your power storage cells, of course.

How To Test iPhone Battery Life 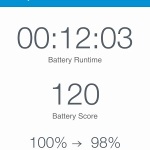 In order to perform an accurate test with Geekbench, you have to be aware, that you need to sacrifice smartphone usage for the next couple of hours. Primate Labs recommends to run the test from 100% to 0% battery level. However, you can also run the test from 100% to 90%, because the app saves your benchmark result even if you decide to stop the trial sooner. This way you can redo the test, for the same interval, each month and check how your battery’s strength develops.

Else, if you wish to do it by the book follow these steps:
– Plug-in your device and wait until the percentage reaches 100% 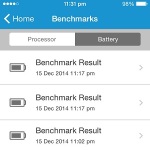 – Open Geekbench 3 and tap on Run Battery Benchmark.
– Leave the Dim Screen selection ON and unplug your iPhone
– Hit START and wait until your smartphone’s battery is completely drained
– Plug in device again and power it on.
– Open Geekbench 3 and the battery result will be displayed. If you wish to take a look at previous tests, tap Previous Benchmarks an hit the Battery tab.