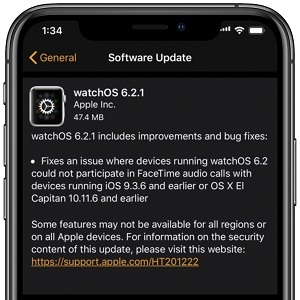 Alongside iOS 13.4.1, Apple has also rolled out watchOS 6.2.1 with a similar fix for a FaceTime bug. iOS 13.4 included a bug that was preventing iPhone owners from engaging in FaceTime calls with other iPhone or Mac owners that were running older software versions. The same goes for watchOS 6.2, the only difference is that the Apple Watch can only join audio FaceTime calls.

So, if you have contacts with devices still running iOS 9.3.6 or earlier and Mac’s with macOS El Capitan 10.11.6 and older and want to call them via FaceTime from your Apple Watch, you’ll need to upgrade to watchOS 6.2.1. The update log doesn’t mention any other changers although it speaks about “improvements and bug fixes”, but most likely this is the standard description that wasn’t updated before the release. 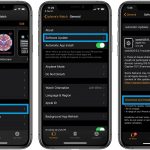 This latest software update can be installed, over-the-air, like all other releases. All that you need is the companion iPhone app. Follow these steps:
1. Open the Watch app on the paired iOS device.
2. Make sure that you are browsing the My Watch tab.
3. Tap General -> Software Update -> Download and Install.
Fact: Make sure that your Apple Watch is connected to its charger and that the battery level is above 50%.
Tip: The Apple Watch has to be in the close proximity of the paired iPhone and both devices have to be connected to Wi-Fi.

Fact: watchOS 6.2.5 has been already seeded to Developers for fine tuning and it will be the next scheduled software update for your Apple Watch. Stay tuned we will update you as soon as it will be released!

If you notice other changes coming with watchOS 6.2.1 don’t hesitate to mention them in the comment section available below!

Related: Do you know how to use the Apple Watch always-on display!