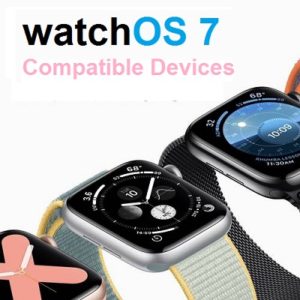 Apple has announced watchOS 7 during the WWDC 2020 keynote. The new operating system is already available for Beta testing to registered Apple Developers. watchOS 7 Public Beta has been announced for the month of July, while the official release is scheduled for this fall.

watchOS 7 brings some great new features like Sleep Tracking, automatic hand-wash coaching, an intriguing Watch Face sharing feature and much more.
However, a more complex OS requires more resources and that’s why the watchOS 7 compatibility list is smaller than expected. Until now, the only Apple Watch model, that had lost software update support was the original Apple smartwatch, Now the list includes the Apple Watch Series 1 and 2.

Update (June 7): watchOS 8 is compatible with all Apple Watch models that are supporting watchOS 7! That’s: Apple Watch Series 3, 4, 5 and 6!

Before we check what Apple Watches are compatible with watchOS 7 let’s see the main requirements.
– To be able to install watchOS 7 on your wrist-worn device you need a companion iPhone that supports iOS 14. This means that you need an iPhone 6S or later.
– Secondly you need a matching Apple Watch. The full watchOS 7 compatibility list is available below. 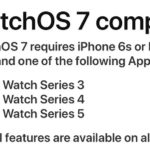 Unlike iOS 14 that supports all devices that are compatible with its predecessor, watchOS 7 isn’t that generous.

Fact: The Apple Watch 1 and 2 models that have already been discontinued by Apple a couple of years ago, will also stop receiving software updates from the fall of 2020.

Why Is The Apple Watch 2 Not Compatible With watchOS 7 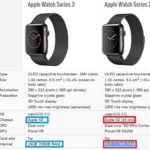 Apple is known to provide software updates for its old devices for as long as possible. The reason why Apple Watch 2 hasn’t made the watchOS 7 compatibility cut is because of its hardware specs. More complex OS demands for more minimium resources. If we compare the Apple Watch Series 2 and 3 we can notice that although the two smartwatches look and act the same, their hardware specs are different. The older models packs the Apple S2 16-bit chip while the Apple Watch switched to a 32-bit chipset starting with the S3 SiP. The newer model also comes with 16GB 768MB RAM internal memory, compared to the 8GB 512MB RAM of its predecessor.

Is your Apple Watch among the watchOS 7 compatible devices? Let us know in the comments section available below.

Related: You might also want to find out if your Mac is compatible with macOS Big Sur!