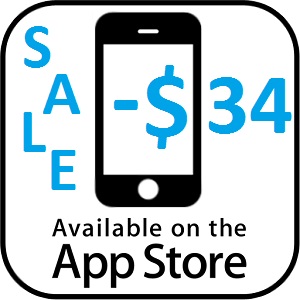 Time to take a look at some of the most interesting apps that you can download for a bargain, these days, from the App Store. I’ve made a list with applications and games worth downloading, free of charge, or for a heavily discounted price. Read on and find a series of popular games for your iPhone and iPad, as well as some useful Productivity, Medical and Photo & Video packages of software for your iOS device.

Do note, that most developers label the discounts as available for a “Limited time only!”. All software listed here is discounted at the time of publishing. After you grab the promotion share this page with your friends, contacts and everyone else interested. We do apologize if the sales aren’t available anymore by the time you read this material. It means that you found out about it too late.

12 Heavily Discounted App Store Apps
If an application attracts your attention, tap on its name to open the official App Store download page and grab the advertised sale.
1. 3D Anatomy ( FREE) – A Medical app that helps you learn the human anatomy in a 3D perspective. Perform virtual dissections, learn how the anatomical parts of the human body are pronounced, test your skills with 3D quizzes. Male and female reproductive systems are included. Comes with support for English, French, Spanish and German!

2. Drafts – Quickly Capture Notes, Share Anywhere! ( $4.99) – A Productivity app that helps you to easily capture text and send it anywhere. Easily type down notes, todos and anything that you want to save as a draft. The app has also an Apple Watch version and comes with full iOS 10 support including: Messages app, quick dictation, Spotlight Search indexing of drafts, Lock Screen Widget, 3D Touch and much more.

5. Night Sky Pro ( FREE) – A Reference app that allows you to quickly and efficiently identify the skies. Point your iOS device towards the sky and identify the stars, planets, constellations and even satellites. Comes with a few interesting features like: Breathtaking New Sky View, Sky Time Machine, Complete 3D Solar System View, Deep Space Objects, Stargazing Conditions and much more.

6. Mr. Jack Pocket ( $3.99) – Is a great deduction game that brings you in the role of the mysterious Mr. Jack who is trying to evade the police. You can also be on the right side of the law and try to corner Mr. Jack. A great boardgame that is compatible with all iOS devices. On iPad it also provides the duel mode playable between two players. This boardgame is heavily discounted!

7. Super Phantom Cat – Be A Jumpin Bro ( FREE) – Is a platformer game gone free! Travel through different worlds, uncover secret paths and collect data to unlock more characters. The app is featured in over 166 countries in the App Store.

8. Lara Croft GO ( $0.99) – This game has won the Apple iPhone game of the year award in 2015 and is now heavily discounted on the App Store. It’s a turn based puzzle-adventure game that allows you to explore the ancient civilization. Discover secrets and pass deadly challenges while you uncover the myth of Queen of Venom. Navigation is done with swipe-to-move gestures. 101 puzzles to solve, along 6 chapters.

9. Get’Em ( FREE) – Is a unique video game that allows you to impersonate the role of police dogs. Be an animal superhero that fights the city’s most dreaded villains. Save your friends and make the K9 police unit. The game is free for a limited time only and you won’t regret trying it!

10. Reflow ( FREE) – Here is an Augmented Reality game on sale. No, I’m not talking about Pokemon GO! Reflow uses your realtime camera image. Your environment is abstracted to black and white and virtual fluids start flowing. Use objects, friends, pets or anything else to solve the challenges. The game is hard to explain, you have to play it to understand it!

11. Lifeline: Whiteout ( $0.99) – A lost adventurer relies on your skills to survive after he finds himself alone in a frozen wasteland without remembering how he got there. Your decisions during the game have a strong impact on how the story unveils. The game comes with an Apple Watch app and many consider it among the best games playable on the smartwatch too.

12. Evel Knievel ( FREE) – Play the role of the famous daredevil and relieve his spectacular and famous career. Start with easy jumps and end up leaping above 13 London Buses or the Las Vegas Casino Fountains. Earn money from performing jumps and buy more powerful bikes and outfits.