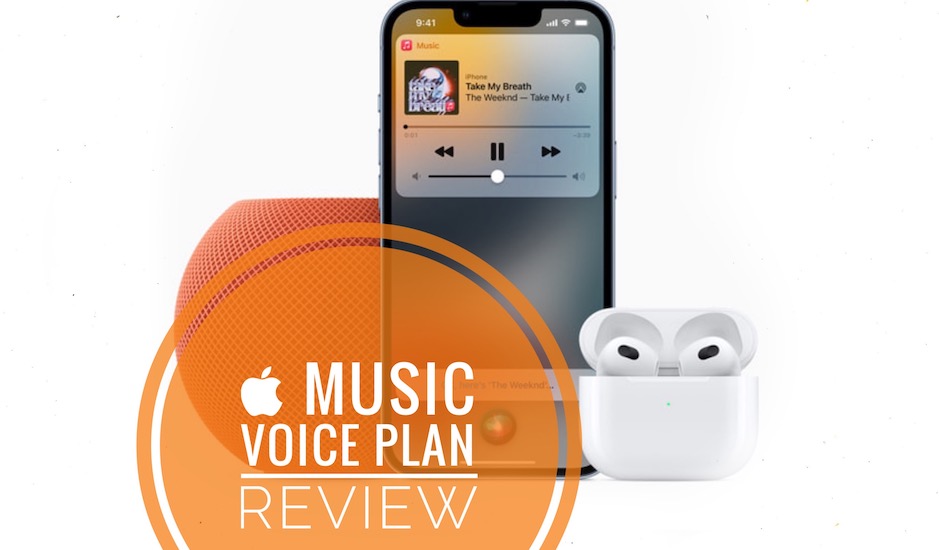 The Apple Music Voice Plan is a new low price subscription introduced by Apple during the Unleashed event keynote. It allows members to get access to the full Apple Music library for only $4.99 a month! There is a catch though. All music can only be accessed and controlled via Siri!

Apple Music currently has over 90 millions songs that can be accessed via the Music app on most Apple devices including iPhone, iPad, AirPods, Mac and HomePod mini.

The new Voice Plan allows you to play all these songs, but you have to control the playback only via Siri. Less functionality, is the trade-off that you get for a cheaper plan.

As a Voice Plan subscriber you still have the Music app on your device, but you get a more simple, customized User Interface. It includes a queue with recently played music, and suggestions based on your preferences.

Fact: To make music playback via Siri easier Apple is adding hundreds of mood and activity playlists, curated by the Apple Music editorial team. Some examples provided in the keynote include ‘Hey Siri, Play the dinner party playlist’, ‘Play something chill’ and ‘Play more like this.’

Tip: A special ‘Just ask Siri’ section provides tips about how to approach the virtual assistant and use the Voice Plan at maximum capacity. 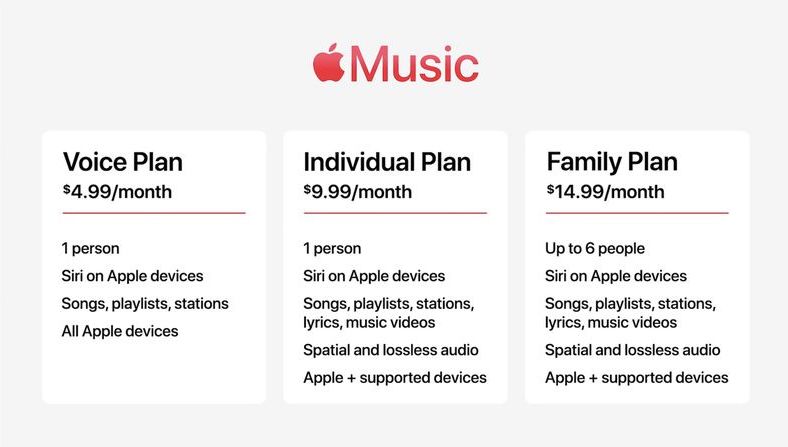 Fact: All the new playlists crafted for the Voice Plan will also be available on all other plans! The other way around also works the New Music Daily, Today’s Hits, Today’s Country, A-List Pop and other popular playlists can be played on the new plan via Siri!

This comparison is simple. The Individual Plan packs all the features of the Voice Plan and allows extra the regular app-based User Interface in Apple Music, alongside Spatial and lossless audio.

The Voice Plan misses the classic Music app UI, as well as lyrics and videos for songs. It is also not available for other devices supported by Apple.

Is The Voice Plan Included In Apple One?

Yes, if you’re an Apple One subscriber you don’t need an extra Voice Plan membership. In fact, Voice Plan is also included in the basic Individual Membership, you don’t need to purchase it extra. You can only downgrade if you’re willing to sacrifice functionality for money.

There are two ways to subscribe to the new membership:
1. Via Siri
Just speak out: “Hey ‌Siri‌, start my ‌Apple Music‌ Voice Trial!” and follow the on-screen instructions.

2. From The Music App

Or, open Music and tap on your Profile icon (in the Listen Now tab). Tap on Manage Subscriptions and opt for the Voice Plan.

Yes, Apple provides a 7-day trial period. You can cancel anytime before the week ends and avoid to be charged.

If you don’t like the Voice Plan you can quit it anytime in Music -> Profile -> Manage Subscription -> Cancel Subscription.

Do you plan to subscribe to the Apple Music voice plan? Are you running the trial? What’s your feedback? Use the comments section!