How To Disable Automatic Downloads Of iOS Software Updates 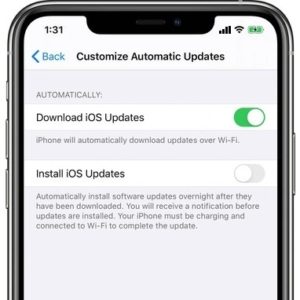 The iPhone Automatic Updates feature has been introduced in iOS 12. This setting allows your iPhone to automatically download and install new iOS versions “as soon” (usually with a delay of a couple of days) as they become available. The update process takes place overnight and you’re notified in the day prior to a planned update. However, the notification comes after the software update has been already downloaded.

Starting with iOS 13.6, you have a better control of this feature. Automatic Updates are now fully customizable. Downloads and installs are treated separately. You can disable automatic downloads, if you don’t want to let your iPhone decide when to grab the new iOS version. However, you can still allow automatic installs and let your Apple smartphone deploy a new OS version while you sleep.

How To Customize Automatic Updates
Before you start applying the step-by-step tutorial listed below make sure that your iPhone or iPad runs iOS 13.6 respectively iPadOS 13.6 or later.
Important: The two software versions haven’t been released yet. This feature has surfaced during the beta testing stage. We will update this article as soon as iOS 13.6 is out. 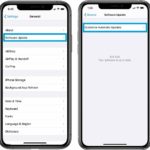 1. Open the Settings app on your iPhone or iPad.
2. Tap on General.
3. Select Software Update.
4. The former ‘Automatic Updates’ setting available at the top of the screen has been now renamed to ‘Customize Automatic Updates’. Tap it!
5. Disable or enable the ‘Dowload iOS Updates’ option.
Fact: new iOS versions are downloaded only when Wi-Fi is on. Don’t worry if you have a small carrier data plan.

Why Would You Disable Automatic Downloads Of iOS Updates
1. Manual Updates Fan.
The main reasons for turning off automatic iOS software update downloads is knowledged. There have been problems with bugs surfacing in fresh iOS updates before. Many users prefer to document themselves before upgrading. Some of them are jailbreakers that they might lose their jailbreak opportunity if the iPhone automatically updates to a new iOS version.

2. Storage Space Limitations
Another reason for disabling automatic downloads of iOS Updates is if you’re struggling with the storage space on your iPhone. iOS updates can be significant in size and an unexpected download could take up all the free space left and you might have problems with recording a new video or performing other basic tasks.

3. Weakened iPhone Battery
Last but not least you might want to drop out of downloading iOS software updates automatically if your iPhone’s Battery Health score isn’t that good anymore. An unexpected download, performed in the background could add additional strain on your battery and you might end up without any juice left when it matters the most.

Are you using Automatic Updates on your iPhone or iPad? Let us know in the comments section available below.

Related: iOS 13.5.1 is the most recent software update. You can read more about it here.