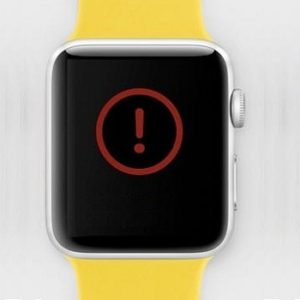 We’ve recently received a report about an Apple Watch that displays inaccurate battery readings and shuts down when the battery percentage reaches the 50% level. We couldn’t replicate the issue on our own watchOS devices but have found a series of other similar claims on Apple’s Discussion Forums. It seems that the most affected model is the Apple Watch Series 5 edition, but a few users of the Series 4 have also encountered it.

Apple Watches plagued by the random shutdown issue are displaying the 100% battery load, or a value close to the maxim battery percentage level, even after several hours of usage, before quickly dropping down to around 50% and shutting down. The problem manifests itself even on new Apple Watch units which have no reason to experience battery degrading. Filtering out the most unlikely scenario that the batteries are faulty out of the box, only a software glitch can cause the inconsistent battery percentage readings.

Until now there’s no universal fix that can be applied to all. Please test out the troubleshooting tips provided below and use the comment section to inform us which one worked for you.

-> Wake your Apple Watch and swipe-up from the bottom of the screen to bring up the Control Center -> turn ON Airplane Mode.
-> Click the Digital Crown and open the Settings app -> tap on Bluetooth and turn it Off.
Tip: This way you’ll force your Apple Watch to disconnect from the paired iPhone. Wait for a few minutes before disabling Airplane Mode. Bluetooth will be automatically enabled.
-> Let your Apple Watch’s battery dry up completely, before charging back to 100%. Did this work?

Use your Apple Watch until it shuts down. Then, bring it on the sidelines for 24 to 48 hours to allow the battery to completely drain and force the Watch to have a ‘natural’ blackout.
Start a new charging cycle and let it charge to 100%. Use your Apple Watch and let us know if the problem reoccurs.

The unreliable Apple Watch battery percentage readings can be fixed in some cases, by un-pairing and re-pairing the device to the companion iPhone.
-> Open the Watch app on your iOS device.
-> In the ‘My Watch’ tab, tap on General.
-> Scroll all the way down and hit Reset.
-> Tap on Erase Apple Watch Content And Settings.
-> Pair your Apple Watch back. Step-by-step guide available here.

Some users that have managed to stop the Apple Watch inconsistent battery readings have reported that they changed the charger. If you have an iPad or a higher wattage iPhone charger use the larger charging block to juice up your watchOS device and see if it makes any difference.
Fact: If you do experience positive results don’t hesitate to share them with us, in the comments section available below.

5. Switch Off AW Before Charging

Another temporary fix that works for some users is to turn off the Apple Watch before connecting it with its charger.
What will automatically power ON after it starts charging. This will lead to more precise battery readings.
The downside is that you have to repeat the process before each charge.

Conclusion: Your Apple Watch hardware is most likely fine. The problem is software related. Some users that have updated to the watchOS 7 Beta have managed to get rid of the inaccurate battery readings and unexpected shut downs. watchOS 6.2.8 is the most recent AW software version (at the time of writing). Unfortunately there are reports that confirm that the issue wasn’t fixed by this release.

Did you manage to get rid of the inaccurate battery percentage readings on your Apple Watch? Let us know with the help of the comments section available below!

Related: Learn how to use the Apple Watch Always On feature introduced in watchOS 6.