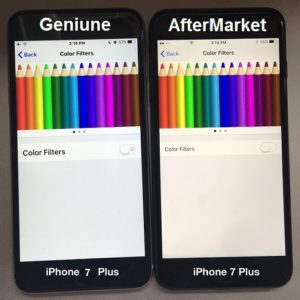 Have you recently serviced your iPhone and replaced its damaged screen? Is the new display acting weird, registering touch commands without your fingers even reaching for the glass? Is it impossible for your to write text because random letters are auto-pressed on the keyboard without you even touching the screen? Does the iOS device simply act erratic? In this case you’re iPhone is surly having a digitizer problem.

If you recently dropped your iPhone or submerged into water and suspect liquid damage, than the solution is simple. You have to bring it back to the Apple Store and opt for another screen replacement. However, what do you do if you just had your iPhone serviced and the problem surfaced out of the blue? There is a single scenario for this case. You did not replace your iPhone’s LCD in an Apple Store or in an authorized Apple service and the replacement parts aren’t genuine! 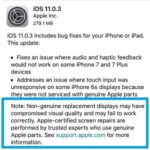 Apple has recently issued the third minor update since the release of iOS 11 and this time the release notes did not display the classic “bug fixes and performance improvements” announcements, but also informed us that you can end up with an unresponsive iPhone if it’s not serviced with genuine Apple parts. According to the Cupertino-based tech company “Non-genuine replacement displays may have compromised visual quality and may fail to work correctly. Apple-certified screen repairs are performed by trusted experts who use genuine Apple parts.”
This means that Apple can alter, software-wise iPhone’s that are equipped with aftermarket LCDs and turn them in erratic smartphones.
Fix: Thankfully this was only a warning and iOS 11.0.3 solves the erratic touches registered on iPhones that received aftermarket screen replacements! So, don’t waste anymore time and upgrade to iOS 11.0.3. If your iPhone becomes so erratic that you can’t open up the Software Update screen, via the Settings up, try updating with iTunes. You can download the iOS 11.0.3 IPSW files here. 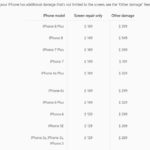 If you just broke your iPhone’s screen don’t despair. This happens to a large percentage of iPhone users and is quite an easy fix. It’s also a cheap one if you have an active AppleCare+ insurance and you haven’t depleted your two accidental damage incidents. Depending on your iPhone model a screen replacement covered by AppleCare+ costs $29 for all iPhone models from the SE to the iPhone X. The price skyrockets if your device is out-of-warranty: $129 for the iPhone 6 and SE; $149 for the iPhone 8, 7,6S and 6 Plus; $169 for the iPhone X, iPhone 8 Plus, iPhone 7 Plus and iPhone 6S Plus.
Fact: The AppleCare+ premium is billed at $129 for the iPhone 8, 7, while the oversized Plus models see a $20 increase to $149. The most expensive iPhone the X model comes with the highest AppleCare+ costs at a whopping $199.

Conclusion: Although replacing your cracked or damaged iPhone screen at a third party service provider is in most cases cheaper, you will most likely end-up with an aftermarket display that could be unrecognized by Apple in an upcoming software update!