iOS 11 Adoption Rate Close To 55% One Month After Release 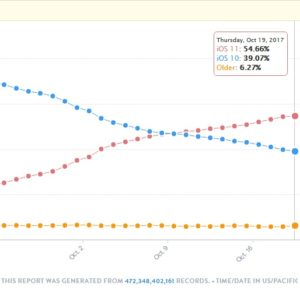 Apple has always excelled when it comes to the rate their users implementate software updates. iOS 11 makes no difference and although its adoption rate is a little slower, when compared to how fast iOS 10 was installed on iPhones and iPads after its release, the figures are still impressive and overwhelming when compared to its main competitor, Android. Exactly one month after the launch of iOS 11, almost 55%, 54.66% to be more precise, of iPhone, iPad and iPod touch owners have upgraded for the latest iOS generation.

Compare this with the fact that the Android Nougat is installed only on 16% of devices, after one year since its release and you’ll notice how big the gab is between the two platforms. Check out the screenshot uploaded below from Mixpanel.com and notice how the iOS 11 adoption rate has steadily picked up from day 1 until the OS became 1-year old. Notice, that the 11th iOS generation was installed on over 1.5% of iPhones and iPads before it even premiered, showing that Apple has a good amount of volunteers willing to test and fine tune their OS. 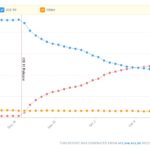 Check the chart uploaded nearby and notice that iOS 11 was already installed on 25% of the available iPhones and iPads only one week since its roll out. iOS 10 was on the losing side of terminals, with older iOS version remaining stable at around 6% during the entire month.
On October 9, 20 days after it premiered, iOS 11 overtook iOS 10 in the preferences of iPhone and iPad owners scoring 47.09% to 46.81%. The difference continued to grow until today, 1 month after the release, when iOS 11 stands at %54.66, while iOS 10 is still installed on %39.07 of Apple smartphone and tablet terminals.