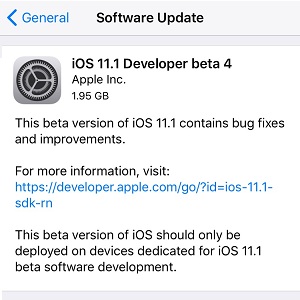 Apple has surprised us today with a series of Beta software updates. The 4th test version of the upcoming iOS 11.1 has been rolled out by the Cupertino-based tech giant, only 4 days after Beta 3 was released, at the start of this week. This surly isn’t an incremental update as its an aproximate 2GB firmware that has to be downloaded over-the-air or via the Apple Developer website.

There is a high chance that iOS 11 Beta 4 for is also the Golden Master version, as Apple prepares for the official release of this first important iOS 11 iteration, with the launch of the iPhone X looming at the horizon. iOS 11.0.3 is currently the most recent public software version available for compatible iPhones, iPads and iPod touch models. All iterations of the 11th iOS generation have focused,so far, on bug fixes and performances. However, iOS 11.1 is expected to premiere Apple Pay Cash, the peer-to-peer payment option within iMessages, introduce hundreds of new Unicode 10 emojis as well as improve the Portrait Lightning feature ! 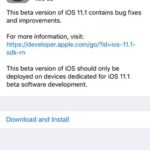 The 4th test version has currently been seeded only for registered Developers. This means that you have to log-in with your Apple Developer account, download the iOS 11 Configuration Profile and update over-the-air. If you already own a prior Developer beta, simply open the Settings app, browse for General -> Software Update and proceed with the upgrade.
If you aren’t a Developer and neither patient enough to wait for the iOS 11.1 Public Beta 4 version, you can grab the iOS 11 Configuration Profile using the trick explained here.
Fact: iOS 11.1 Beta 4 has build number 15B92 and is compatible with 39 iPhone, iPad and iPod touch models.