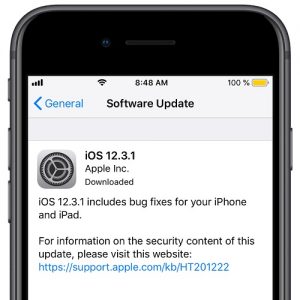 Apple has issued a minor iOS update that took us by surprise. This release wasn’t preceded by a beta testing phase. Nevertheless, iOS 12.3.1 is here to fix a series of bugs for the native Messages app, as well as a VoLTE calls related patch. As usual, this new iPhone, iPad and iPod touch software release is downloadable over-the-air from the Settings app. Opt for General -> Software Update and tap on the Download and Install button. Provide your Passcode, agree with Apple’s terms and be patient until the most recent iOS version is deployed on your device.

iOS 12.3.1 is only around 80 MB large, if you update from iOS 12.3. It doesn’t include any new features, excepting the bug fixes mentioned above. This release doesn’t include any security patches and our tests conclude that it’s safe to upload. It feels as fast and reliable as iOS 12.3. Don’t hesitate to grab it! 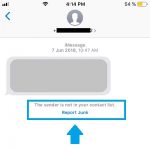 Apple showcases this minor update as including “bug fixes for your iPhone and iPad”. The extended update log mentions the following:
– The Filter Unknown Senders feature from the native Messages app becomes reliable again. In previous versions it could miss to filter out unknown numbers allowing them to be listed in the Contacts conversation section.
– Messages received from unknown senders can be reported as junk again. A bug that prevented the Report Junk link from appearing, below the content of the message, has been patched.
– iOS 12.3.1 also fixes an issue that could prevent making or receiving VoLTE calls.

iOS 12.3.1 Jailbreak
Gone are the days with jailbreaks available for the newest iOS version. So, if you’re a jailbreak fan, don’t upgrade to iOS 12.3.1 yet, because it will be impossible to downgrade to an earlier version that currently supports jailbreaks. The latest iPhone and iPad software version that can be jailbroken is iOS 12.0 – iOS 12.1.2. It’s a semi-tethered jailbreak available with the help of the Chimera tool.