iPhone Xs, iPhone Xs Plus & iPhone 9 To Be Unveiled On September 12

Posted in News by Patricia on September 4, 2018 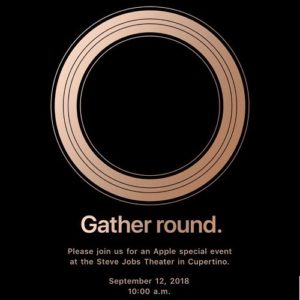 It’s official! The 2018 iPhone flagships will be unveiled, Wednesday, September 12 at the Steve Jobs Theater in Cupertino! Apple has decided to present the iPhone Xs, its oversized sibling as well as the more affordable 6.1-inch LCD iPhone (rumored to be marketed as iPhone 9) on the same calendar day, as well as the same location as last year. If the pattern continues, we can expected iOS 12 to be rolled out to the general public on September 19!

“Gather round” is the slogan of this year’s September 12 keynote, according to the invites that Apple dispatched to the press and partners. The invite comes with a logo, which could symbolize the impressive Apple Park compound. “Please join us for an Apple special event at the Steve Jobs Theater in Cupertino”, is the message printed on the invite. The event starts at 10am and can be followed live online here at iPhoneTricks.org.

September 12 Keynote Facts
A series of new devices will be unveiled by Apple during the September 12 event. Besides the highly anticipated, new iPhone models, a redesigned Apple Watch is also expected to roll out this fall:

Tip: Check out what’s new in iOS 12 and get ready to adopt it as soon as it becomes available!