Posted in News by Patricia on September 6, 2018 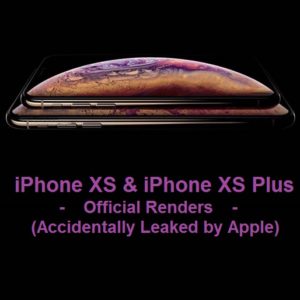 Apple has “managed” to accidentally leak the official renders of their 2018 iPhone flagships, two weeks before the actual release! The much anticipated iPhone XS and iPhone XS Plus smartphones are scheduled to be unveiled during the September 12 keynote, scheduled at the Steve Jobs Theater in Cupertino, California. Nevertheless, the guys from 9To5Mac have managed to get their hands on the official renders that Apple plans to use to showcase the 2018 iPhones.

You can check the two upcoming models in the images uploaded nearby! It’s unclear yet how such a crucial leak was possible. Some state that Apple has tested the feeds for the live keynote and staff from 9To5Mac have accidentally uncovered them, while others assume that the images have been copied from a subdomain of apple.com that was used for testing and preparing the actual revamp of the website for the release. This isn’t too important though, the main fact is that this is the first glance of the upcoming iPhone XS and iPhone XS Plus!

As expected the 6.5-inch oversized iPhone is a larger model of the fine tuned iPhone X that receives its traditional “S” iteration for 2018. We still haven’t got a glimpse for you of the third iPhone expected to be released on September 12, the “iPhone 9”, a cheaper 6.1-inch LCD display smartphone that will come with the same form-factor as the iPhone X.

iPhone XS Pricing
This info is still in its rumor-phase, however there is a high probability that the 2018 iPhone models will have a lower starting price as the 2017 iPhone X, while the “iPhone 9” is expected to be even more cost efficient because of the LCD display, which is a far more cheaper component, when compared to the OLED parts that Apple buys from Samsung for the two flagships!

Tip: The iPhone XS lineup isn’t the only 2018 Apple flagship accidentally leaked by the Cupertino tech-giant. Take a look at how the Apple Watch Series 4 looks like! It’s the first redesigned watchOS device, since its initial release!

Fact: Do you like the marketing iPhone XS wallpaper, showcased in the renders available above? You can download it from here now and use it on your iPhone or any other smartphone!