The much awaited Worldwide Developers Conference edition 2019 is scheduled to debut on June 3 in San Jose, California. There is a huge interest for this event because Apple will preview the next iOS generation. More, the Cupertino-based tech giant will also seed the first Beta version of the new firmware allowing Apple Developers and… 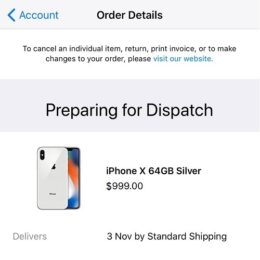 The much awaited iPhone X Pre-Sales have confirmed our expectations as the huge interest for Apple’s edge-to-edged OLED iPhone, combined with a relative small stock available for launch day has led to a sellout within the first quarter of an hour. If you, followed our pre-order tips and also sticked with our live countdown timer…

Read More
Tags:AppleFactsiPhone XPre-OrderResults
Copyright © 2014 - 2022 iPhoneTricks.org
This website is not owned, licensed or affiliated with Apple Inc.
The content of this website is not supplied or reviewed by Apple Inc.
iPhone is a trademark of Apple Inc. For more info please read our Disclaimer.