Upgrade Viber For iPhone 6 and 6 Plus Support 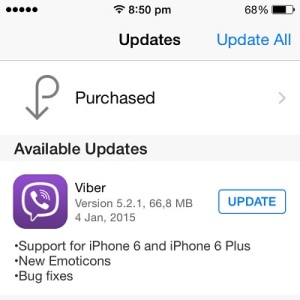 Viber Update comes with iPhone 6 and 6 Plus support.

The first important App Store update of the year comes from Viber Media Inc. The popular messaging and VoIP call provider has just rolled out version 5.2.1, which comes with support for Apple’s latest flagships, the iPhone 6 and 6 Plus!

This release arrives to complete Viber 5.1, released on November 18, 2014. The previous version provided support for iOS 8 features like Interactive Notifications and Share Extensions. 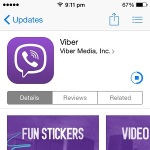 Tap this link and you’ll be redirected to the official App Store Viber update page. Hit Update or Get -> Install (in case you don’t have Viber on your iOS device.). If you’re performing the task from a limited data package do mind that, the size of this upgrade is 66.8 MB. It’s always recommended to download or update your iOS apps when you’re connected to a WiFi hotspot.

Viber on iPhone 5S vs iPhone 6
Below you can check a comparison between a Viber 5.2.1 chat window displayed on an iPhone 5S and the same window seen on the newly supported iPhone 6. You can notice that Apple’s latest flagship can host about 50% more messaging content as the iPhone 5. Proportions remain the same if keyboards are swiped down or not. Do mind that in call voice quality is flawless no matter what iPhone generation you’re owning!