How To Use iPhone Flashlight As Morse Code Translator With Shortcuts 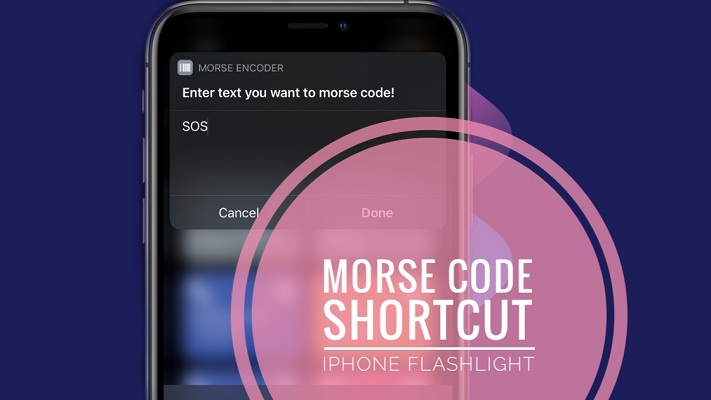 Your iPhone can do a lot of things, but do you know that you can use it as a Morse Code Translator? A spectacular iOS 14 shortcut can be used to turn your device’s Flashlight into a Morse code generator. This is achieved by codding the LED to flash pulsating light combinations, that are following the Morse code alphabet guidelines.

The shortcut doesn’t require any third-party iOS app. It uses the Shortcuts feature and is able to translate any text that you input into Morse code. You only have to follow the steps described below and you’ll be able to communicate via Morse code to anyone that can get a glimpse of your iPhone’s flashlight.

What Is Morse Code?

It’s a way you can communicate without using the actual alphabet. In the Morse Code letters, numbers and punctuation are replaced by a detailed system of dots, dashes and spaces. The Morse language can be expressed with flashing light or sounds that imitate knocks and taps.

Morse code messages can be extremely useful when you need to send a message but you can do it the conventional way. You can surprise your loved one and share your feelings with a nice Morse code light sequence.
On a more serious note, you can ask for help in case of extreme emergencies, like being forced to do something against your will, or being stranded somewhere remote in a forest, without being able to move and communicate via regular carrier signal.
Tip: Keep your messages simple. Don’t use punctuation or other complications that will make the message difficult to decode.

How To Use iPhone Flashlight As Morse Code Translator

Important: The banner notification is accompanied by an audio confirmation. This alert is played even if your iPhone’s Silent switch is enabled. Be extremely careful if you plan to use it in stealth mode, because it can give your position away.

What do you think about this shortcut? How do you plan to use it? Use the comments section and let us know.

Related: You might be interested in the Game of Brightness shortcut that allows you to play a rudimentary guessing came, directly in your iPhone’s Control Center!