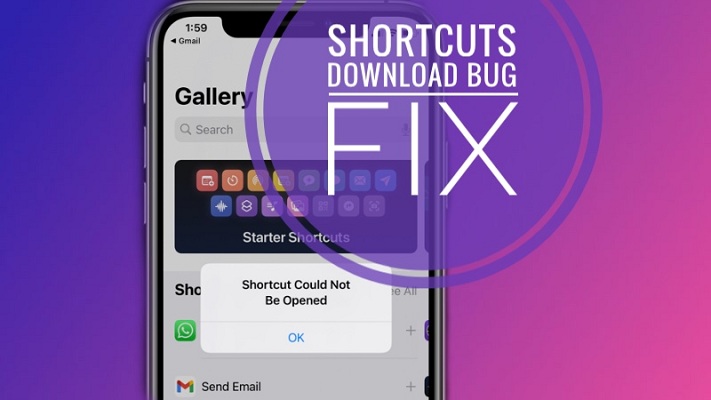 Do you have problems when trying to download a shortcut to the Shortcuts app on your iPhone in iOS 14? The most common error message is the ‘Shortcut Could Not Be Opened’ dialog box. This usually happens when you’re attempting to download an ‘Untrusted Shortcut’. That’s a shortcut that comes from a third-party source and not from the iOS Shortcuts Gallery.

‘Shortcut Could Not Be Opened’ Fix

The quick fix requires you to allow your iPhone permission for downloading Untrusted Shortcuts:

Fact: This allows you to download shortcuts from outside of the Gallery.

Additional Fixes For ‘Shortcut Could Not Be Opened’

However, there are cases when you’re prompted with this iOS 14 Shortcuts bug even when Untrusted Shortcuts are allowed on your device. In this case the problem most likely lies at the other end of the line. Here is how to troubleshoot: 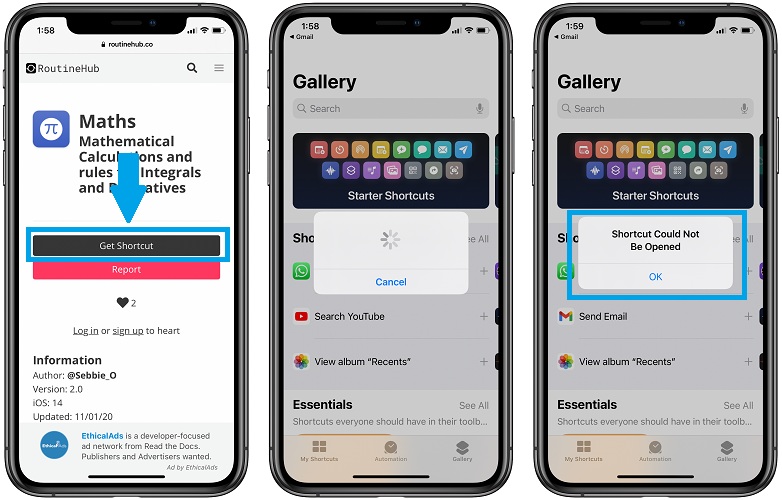 You can try to force quit Shortcuts and open it back to get rid of any minor glitches. However, I do recommend you to force restart your device and make sure that you filter out spotty Wi-Fi connectivity and more:
How To: Quickly click Volume Up, Volume Down. Next, press & hold the Side Button until the Apple logo is displayed on the screen. Release and be patient until the iPhone resprings. Attempt to download the shortcut once again.

If the iOS Shortcuts error persists try to download the shortcut using a different browser, to exclude a Safari related problem. Open the download page in Chrome, Firefox or DuckDuckGo and tap on ‘Get Shortcut’. Does it work?
Tip: You can make Google Chrome default web browser in iOS 14!

iOS 14 shortcuts can be shared via iCloud links or uploaded on third-party platforms like Routinehub. If you’re getting the ‘Shortcut Could Not Be Opened’ error for a Routinehub shortcut, try to download an untrusted shortcut from an iCloud link and see if both return the same error message or one of them can be actually added.
If the error message is issued only in the case of a Routinehub download it means that, most likely there is a problem with their servers.
Fix: Go to Routinehub.co and try to download a different shortcut. Do you still get the ‘Shortcut Could Not Be Opened’ dialog box? In this case you have to remain patient and try again later, or contact the shortcut developer and ask him for a iCloud link of the same shortcut.

How To Add An Untrusted Shortcut

If you’re doing this for the first time and have just got past the ‘Shortcut Could Not Be Opened’ dialog box, you have to:

Have you managed to fix the ‘Shortcut Could Not Be Opened’ prompt? Did one of the fixes mentioned above helped you out? Use the comments section and let us know which one. Still having problems? Don’t hesitate to ask for help.

Did you know that you can play simple games with the help of iOS 14 Shortcuts? Check out the Game of Brightness and let us know if you like it!

Related: How to fix Automations not working in iOS 14!

Last Updated on November 6, 2020 by Patricia