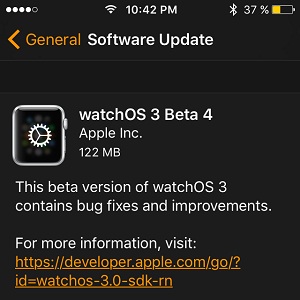 Apple has rolled out the 4th watchOS 3 Beta in an attempt to fine tune the Apple Watch OS for the official release, scheduled for September. This latest version doesn’t bring many visual changes and new features. It promises to patch a few bugs and provides new additions to the new Emergency SOS system. Starting with this generation the wearable owners are available to quickly dial an Emergency call to the local emergency service, by pressing and holding the Watch’s Side button.

watchOS 3 Beta 4 bring alert tones for triggering Emergency SOS even if the smartwatch’s volume is set to minimum. This helps prevent wearers from dialing 911 accidentally. More, if a call to the Emergency services is accidentally triggered, alert tones make you aware of it and offer you the opportunity to cancel the call. Stopping a 911 dial is done via Force Touch. Pres firmly on the screen until the Cancel option pops up.

How To Install watchOS 3 Beta 4 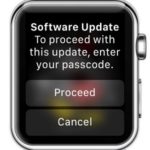 A. AW runs an older Beta
If you already jumped the watchOS 3 Beta testing bandwagon, it’s very easy to upgrade to Beta 4. Grab your iPhone and open the Apple Watch app. On the My Watch page, scroll for General -> Software Update. After your iPhone identifies the latest seed tap on Download and Install. Agree with Apple’s terms and confirm your action by typing your Passcode on the Apple Watch. Next, tap Proceed on your wearable screen.
Allow your iPhone to download the watchOS 3 Beta 4 firmware package. In the meantime make sure that your Apple Watch is charged at least 50% and is connected to its charger.
When the download completes, hit Install and the new software will be deployed and installed on Watch. The wearable automatically reboots when ready! 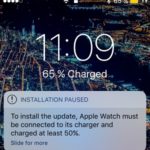 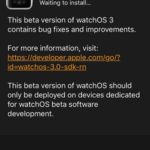 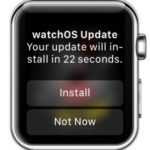 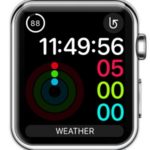 B. AW runs the official watchOS 2.2.2
If your smartwatch is running an official OS version, you first have to grab the watchOS 3 Beta Profile. It’s mandatory that iOS 10 Beta is running on the paired iPhone. Be aware that it’s impossible to downgrade from the Beta to watchOS 2. If you’re OK with and want to proceed, go ahead and install watchOS 3 Developer Beta on your wrist!t

Fact: watchOS 3 is currently configured to display the Digital Activity Watch Face as default background after a new software version is installed!