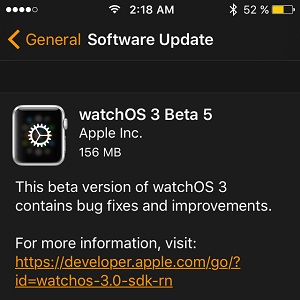 Along with the iOS 10 Beta 5 release, Apple has also seeded watchOS 3 Beta 5. The third Apple Watch Operating System generation is scheduled to be publicly released this fall and promises to significantly increase the speed of your wearable, provide new health apps and features (Breathe, Emergency SOS), enhanced graphics and added functionality to your wearable.

watchOS 3 Beta 5 update package is 156 MB big and has the build number 14S5315a. It is advertised by its developers as a new test firmware that contains bug fixes and improvements. Learn how to update your Apple Watch and test drive the new features. Do mind that you need to run iOS 10 beta version on your iPHone before being able to install the watchOS 3

How To Install watchOS 3 Beta 5
To upload the latest watchOS 3 test version on your wearable, you need to run iOS 10 beta on the paired iPhone. Be aware, that if you upgrade your Watch, you won’t be able to downgrade back to watchOS 2. You’ll have to mail your wrist gadget to Apple and ask them to bring back the latest watchOS version available to the large public.
To download and install watch OS 3 Beta 5 on your Watch you need to open the Apple Watch app, available on your iPhone. Browse for the My Watch view and tap on General. Next, go for Software Update and allow your iPhone to find the update. Tap, Download and Install and the upgrade process starts.
Tip: Make sure that your Apple Watch is connected to its charger and charged above 50%.

Fixed in this release
● Siri: When the user makes a Siri request that involves a deleted app, Siri may not provide the intended response.
● Xcode: When using Watch Connectivity in watchOS Simulator, the debugging console sometimes prints out excessive amounts of logging indicating WCSessionState changes.