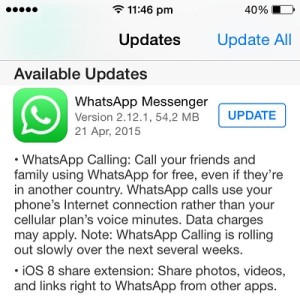 The now Facebook-owned instant messaging app has finally received its update for iOS 8 share extensions. This means that you can now share media from other apps directly to WhatsApp without needing to open the app, select the conversation and manually embed photos, videos or links. That’s a handy feature which comes nearly 8 months after iOS 8 has been released though!

However, Voice Calling seems to be the buzz of version 2.12.1 though. As anticipated by us, at the start of the month, the instant messaging has been update with the option that allows you to call your friends via WhatsApp for free! This allows it to rival with Viber or Skype, platforms that are pioneers in this niche. 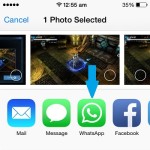 You can now share your favorite photos, clips or Safari URLs with your WhatsApp contacts directly from the app of origin.
If you’re browsing Photos, for example, and it flashes you that a certain image could thrill one of your friends. Simply tap the Share icon and pick WhatsApp from the Share List. If it’s not available among the first choices, swipe-right and hit the More option. Now, activate the newly added WhatsApp option and drag it towards the desired place in the Share options list. 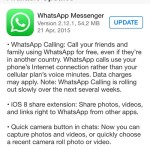 Five significant new additions has the Facebook-owned messaging app received with today’s update. Here you have the remaining three listed and described:
– Edit Contacts: you can now tweak your iPhone contacts from within the app, without needing to switch for the native iOS application.
– Tweak Videos: clips can now be cropped and/or rotated before sending. Multiple videos can be also sent at once.
– Chats Camera: snap, record or pick a photo from Camera Roll to instantly send.