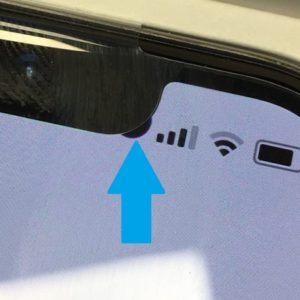 Is your brand new iPhone X displaying a black dot on the screen, similar to the one showed in the image nearby? The bubble is prone to occur near the edge of the display and can most likely show-up in the notch area of screen. Sadly, this isn’t a glitch that can be fixed with a software update. In these situations your dealing with an unit that’s defective on arrival and there’s no way you can solve this manufacturing issue yourself!

Although very rare, this flaw seems to be caused by the OLED panels shipped by Samsung (yes, all displays fitted on Apple’s 10th anniversary iPhone are manufactured by their main South Korean rival!). Similar issues were reported on Samsung’s Galaxy S7 Edge smartphones. The iPhone X’s TrueDepth camera system cutout, at the top of the display, favors this manufacturing flaw. Nevertheless, if the black dot shows up, out of the box, you shouldn’t encounter any problems in getting a free replacement unit from Apple.

How To Get Rid Of The Black Dot
As mentioned above the only way to fix it is to get a screen replacement for the iPhone X. However, in these early stages of the device’s lifetime, Apple will most likely offer you a replacement unit free of charge, especially if you’re dealing with a DOA case.
Important: Misuse and certain hits can also cause black dots on the iPhone X screen. However, those are easy to distinguish and Apple won’t replace your screen for free. If you have the AppleCare+ insurance a screen replacement will cost you just $29. Else be ready to fork out a whooping $279.

Related: Another rare iPhone X manufacturing flaw are the green lines on the iPhone X display.