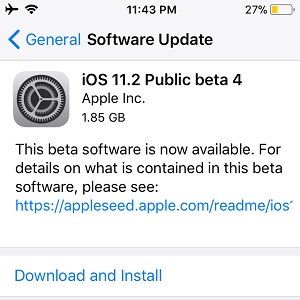 Apple has just rolled out iOS 11.2 Beta 4 for both Developers and Public beta testers, only 4 days after the third beta release and a full three weeks since the start of the iOS 11.2 beta testing campaign. Today’s firmware upgrade has build number 15K5102a (Public version) and 15C5110b (Developer edition). We’re already deep into the iOS 11.2 testing stages, so don’t expect any spectacular new features from this upgrade.

Nevertheless, the previous beta added the fast wireless charging option, allowing owners to charge the iPhone 8, 8 Plus and the iPhone X devices at 7.5 watts, instead of the standard 5 W. It also enabled Siri for offline use, when your iPhone or iPad isn’t connected to the Internet. For a full list of changes and new features coming in iOS 11.2 tap here.

Install iOS 11.2 Beta 4 On iPhone & iPad
As usual, this new test version is available over-the-air from the Settings app, as long as you have the iOS 11 Beta Configuration Profile installed on your device. Else, you have to first install it from your Developer account or from your Apple’s Beta Software Program platform login, before you will be able to see the iOS 11.2 Beta 4 on the Software Update screen.

Fact: You do need the iOS 11.2 Developer beta version if you want to also upgrade your Apple watch and test watchOS 4.2. Here you can find out how to grab the Developer test version for free!