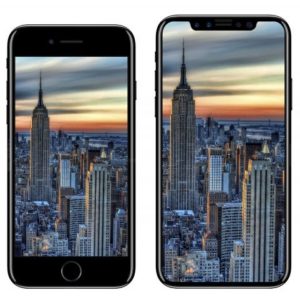 Apple’s 10th anniversary iPhone, known among iOS fans as the upcoming iPhone 8, has seen an intensification of leaks and rumors in the past few weeks. The first OLED terminal manufactured by the Cupertino-based tech giant is only due in September, but Apple seems to have decided upon its looks and sizing, just in time to keep the release on schedule. Most likely, the iPhone 8 will come in between the iPhone 7 and iPhone 7 Plus sizes. In fact, recent rumors place it just a notch bigger than its 4.7-inch predecessor. However, the screen real estate increase will be much more significant in favor of the new iPhone, due to the edge-to-edge display.

To be more precise most leaks describe it as 144mm tall, 7.1 mm thick and 7.7mm thick. This can be compared with the 138.3mm x 67.1 mm x 7.1mm of the iPhone 7 and the 158.2mm x 77.9mm x 7.3mm of the 5.5-inch device. The differences can be best anticipated in the image provided nearby that displays a @D side-by-side comparison of the three Apple smartphones. Notice, that the iPhone 8 portray confirms a recent rumor issued by famous supplier TSMC, that relieved us all when confirming that the Cupertino techies have finally managed to integrate the Touch ID sensor within the OLED display. 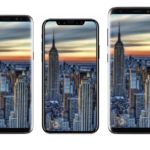 Fact: Wireless charging and dual-lens front facing camera are the hottest features anticipated for the upcoming iPhone 8! Stay tuned and we’ll let you know if and when they get confirmed.